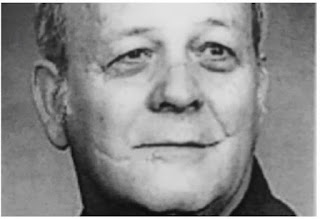 About a year after I met Scottie (and 6 months after my divorce was final), his dad, Harry Slaughter, got sick. Actually Harry had been in and out of the hospital in Richmond,Virginia for the better part of a year. Scottie flew there in August of '09 when he got the call from his mom, Nancy. When Scott told me that Harry'd had a stroke and wasn't doing well, I flew out for the weekend.

I'd never been to Richmond before. The day I arrived it was cold and grey. The breeze near the airport smelled of rain and BBQ smoke. Scottie picked me up in his mother's brown mini-van. I was glued to the window after I fastened my seatbelt. So THIS is Richmond! Known for it's peanuts and pork. Land of Jefferson and VCU! A battered yellow pick-up truck pulled in to the "departures" lane with a hand-painted sign obscuring it's back window. It read: "give me my guns, my money and my freedom - you can KEEP the change". "Change" was, of course, the platform on which our President had run that previous year.

Scottie sat me down when we got to the hospital. "Mom and I are going to talk to Dad first" he said. I nodded. ​That sounds about right. I was nervous anyway. I welcomed the delay.

"We told him that my new girlfriend was coming to meet him today". I nodded a second time. Why was he telling me this like it was new information? He held my eyes for a second before continuing. "But we didn't really get around to letting him know that you're Black.

I fought back a grin. ​Surely this was a joke! I giggled, "Is that a problem?".

Scottie squinted his eyes, "It might be. He hasn't ever really known any Black people. He's had strong -er, feelings about anyone who wasn't white." He kissed me and squeezed my hand. "It will be fine. He'll love you." By this time, Nancy had already gone in. The automatic ICU doors made a whooshing sound as Scottie walked through to join her. I sat down on one of the 20 or so hard, red felt-covered chairs in the otherwise empty waiting room. I felt my heart rate speed up. My hands were suddenly cold and clammy. I should have stopped for water.

My mouth was so dry. ​So, Laura, you're going to meet a racist old white man on his death bed. Do you really think that's smart? What if he gets so angry that he has another stroke? I wanted to go outside and get some air. I hate that hospital smell. My breathing became shallow. I tried to divert my attention from my on-coming panic attack. There was a microwave on a table in the corner. I tried to read the brand name from my seat without getting up. ​Amana - that was too easy.

I closed my eyes. A strong Chef Boy-Ar-Dee-esque smell wafted toward me from that direction. I covered my mouth to keep from gagging. I had decided to go splash some cold water on my face when suddenly a Black woman appeared in the waiting room door. She was followed immediately by what must have been her entire family. There were men, women and children of all ages. Some were crying. Others talking loudly. In an instant the room was alive with energy. The kids spread out on their bellies on the stained-brown carpet and pulled out tablets and books. One of the adults popped open the microwave door and retrieved the microwavable meal inside and peeled off the plastic top-skin. No one looked at me.

I observed them with amazement. They were so loud and chatty. The microwave-meal guy sat next to me. I turned ever so slightly away from him in my chair. I was really happy to see Scottie appear in the doorway just then. I looked up at him gratefully. He looked so handsome. So vulnerable. So...confused! He didn't know where I was! He was scanning the waiting room back and forth looking for me and couldn't find me. I laughed inwardly. I pictured him saying to himself "Which one is mine??". I stood up.

He finally saw me and walked over to me, gingerly stepping over the carpet children. "Lets go in" he said. I took his hand. I heard that same whoosh as the ICU doors closed behind us. Nancy was standing outside a room. "Only two at a time" she said in her soft fluttery southern accent. "He's ready to meet you, Laura". I braced myself and stepped through the threshold, holding my breath so as not to smell bed pans and Lysol.

When I saw Harry in his white and pastel colored hospital gown I exhaled. O​h my God. He looked so small, so frail. I put my purse down next to his bed as I walked in. He opened his eyes and I saw them. Scottie has the kindest eyes I've ever seen. And there were Scott's eyes staring back at me from Harry's face. I felt a tear make it's way down my face. "Here she is Dad" said Scott, leading me around to Harry's good side. "What do you think?" Harry couldn't move. Couldn't talk. I sidled up close to him and smiled. "'Hi" I said. "I'm so glad to meet you". Harry's eyes were following me. His fingers shinnied across his thin hospital blanket and found my hand. He held it up and looked at Scottie.

"Beautiful" he mouthed to Scott. "She's beautiful". He raised my hand to his thin, soft lips and kissed the back of it. He turned his eyes back to me. "Beautiful" he said again. We were all crying now. He motioned for me to sit on his bed next to him. All the southern "keep the change" notions in my head bounced away.

"Thank you" I said, taking a seat.
Posted by Laura Cathcart Robbins at 9:55 AM