Ever since I can remember I've been daddy's little girl. And despite the fact that my parents divorced when I was five, along the fact that I haven't lived in the same state as my dad since that time, I always felt as though I were raised by both of my parents. My dad and I have a deep connection. And sitting there next to him that day, I could see that whatever he was about to tell me was hard for him.

"Okay?" I said smiling at him expectantly.
"I have two more children," he said finally. "They are brothers, two boys. I met their mother..."
I honestly have no memory of the details he shared with me after that. I just remember being unbearably uncomfortable.
After a minute so, I reached over and touched his arm to silence him.
"It's okay Daddy," I told him. "You don't have to explain."
Looking back, I think it probably seemed to him as though I were responding to the fact that he had kept something from me.
Maybe it seemed like I was saying, "Daddy, it's okay you don't have to explain why you didn't tell me this until now. Please don't feel bad."
But in fact, what I was saying was "Daddy, it's ok, you don't have to explain why you went and had two more children. Don't worry, it won't affect my life."

And it didn't. I never asked about them after that. I remember him bringing them up occasionally and me responding with an awkward stiffness. I didn't really mind that my dad had a relationship with these two young men, but certainly I couldn't be expected to relate to them like my other (real) brothers. I didn't know them. I had no history with them. And frankly, for reasons I wasn't ready to examine, I wasn't at all interested in getting to know them. When it came to the subject of them, my protective shields were up. I found myself holding my breath when my dad interjected anecdotes about them into our conversations.

A lot of life happened after my dad and I had that conversation. I started a business, got married, closed my business, had my two sons, became the ultimate PTA mom, checked into rehab, got divorced, got sober and met Scottie. There is more of course, but those are the broad strokes. My brothers that I had grown up with, my mother's son, Kenji and my father's son, Kofi, were part of my life throughout all of this. They were both loving sources of comfort for me. They, along with my teenage step-brother, Chris, were and are, my family.

As I transitioned in to this new phase of my life, the idea of these two "mystery brothers" faded further and further away. I knew their names (Jay and Jordan), but had no idea how old they were, I didn't know where they lived or what they looked like.
I remember being on the phone with Kofi once and him saying very casually that "Jay" was in town.

"Jay who?" I asked, trying to picture what friend he was talking about. "Jay - our brother?!?"
What?!?
Stunned silence.

"Oh right," I said (hoping to sound equally casual). An inkling of envy crept into my head. Maybe it was jealousy, I don't really know. One of my "rights" in life, as I understood it, was that I was Kofi's only sibling. I was his proud big sister. It just hadn't occurred to me, that not only did he claim these two brothers, but that he might have a relationship with them as well.

About a two year's ago, Jordan messaged me on Facebook. I had never seen what he looked like before. I looked at his picture for a long time trying to see what it stirred up inside of me. He was young and handsome. He had deep, gingerbread skin and our family nose and cheekbones. 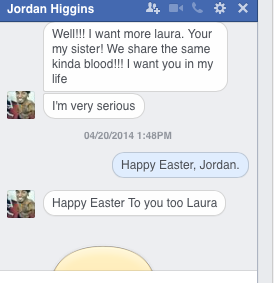 I was paralyzed. He was right of course. He was having the appropriate response to the knowledge that he had a sibling that he didn't know. He wanted to know about me. He wanted to get to know me. I, on the other hand, was having a dramatically unusual response. I felt disproportionately disconnected from the fact that I had two brothers that I didn't know. But I knew that I was staring at proof that I couldn't just continue to ignore them. Four days passed, and after talking to my sponsor, I responded by wishing him a happy Easter (I know it looks lame, but believe me, at the time — that was a lot).
Posted by Laura Cathcart Robbins at 2:26 PM