Keep You Hands Where They Can See Them....


On day three of the trip, while driving around Seattle Washington, our navigation system's female British voice, instructed us to ​Make a right turn on "Mah-tin Lou-thah King June-yuh Boulevahd"
"Lily?" I adjusted the rearview so that I could see Scottie's 17-year old daughter. She smiled and met my eyes in the mirror.
"Yes?"
Lily had volunteered to ride with my mom (Linda), Miles and Justin and I on the first leg our road trip from Vancouver to Los Angeles. She was sitting behind me in the rented, burgundy, Kia minivan. My mom sat next to her, Justin was in the way back and Miles was riding shotgun.
"We're going to fill in some of the 'Black holes' (as it were) in your education during this trip, okay?"
"Ok-kay...?" Her blue eyes wide with anticipation. "What kind of 'black' holes?"

Justin sat up and made eye contact with me in the rearview too, his eyebrows knit with mock concern.
Miles tapped my arm impatiently and mouthed "what black holes?".

"Lesson number one, Lily" I continued without looking at them, as we turned into an Ezell's Chicken parking lot. "No matter what city you're in, when you're you see the names of historically significant, Black Americans on street signs, schools or hospitals -- where are you?" Both Miles and Justin made muffled "OOH!" sounds and put their hands in the air like they were watching a game show where the contestant didn't know the answer.
Justin put his head between the seats next to Lily's face.
"The hood!" he yelled in her ear, not giving her time to think about it.
"The hood," I agreed smiling at his eyes in the mirror.
"So Lily," I turned my attention back to her, putting the car in park.
"Here we are at Ezell's Chicken on Martin Luther King, Jr. Blvd. Can you tell me where are we?"
"The hood...?" she ventured with a tentative smile.
"The hood!" I affirmed with a wide grin, dangling my hand behind my headrest so she could give me 'five.' "That is correct!"

From that point on, we developed a kind of "cultural exchange" as we drove our 200 mile stretches of freeway. It became part of what the five of us did to pass the time. We, the Robbins' (and Ternoir) family regaled Lily with tales of life in Los Angeles; movie premieres, basketball tournaments, which rapper was dating which Kardashian/Jenner, etc. And Lily gave us Stowe - camping sleepovers, swimming in ponds, ski races and bonfires.

Two weeks later...
"I think I know what I'm going to write about for my college admissions essay."
"Oh yeah?"
Scottie had Lily on speakerphone in the kitchen where I was sautéing mushrooms for vegan quesadillas. She was back in Stowe, and had just finished the first day of her senior year of high school.
"I think I want to write about our family. I've been thinking about it since our road trip."
I turned the pan off and pushed it to the back burner. Scottie was looking at me and smiling, like he knew what she was going to say.
"Really? Tell me."
"I went through a few different topics with my councilor," she said. "He said they were all good, but really common — there wasn't anything there to set me apart. So I just started talking to him about our summer and ended up telling him about how being with you guys made me see things differently for the first time."
"You mean, like Martin Luther King Jr, Blvd?" I was smiling now too.
"Yes...but I really meant more like when you talked to the boys about getting pulled over."


I closed my eyes for a second to remember what she was talking about.
"You mean when I told them what do if they were pulled over by the police?"
"Yes," she said quietly. "No one has ever talked to me about that. I don't think any of my friends have ever had that conversation either."

That day in the minivan came flooding back to me.

"Okay, okay" I said quieting them down after a highway patrol car passed us up. "So what's first if you get pulled over?"
"Pull over," said Justin in a deadpan voice.
"Signal then pull over" I continued undeterred. "And...?"
"Get your license out," said Miles. "Do we have to do this again? We know it, Mom." "Yes, we have to do it again. And No! You wait until they ask you for your license. But the most important thing is you keep your hands where they can see them. On the steering wheel unless they instruct you do anything else."
"Right, right... keep our hands on the steering wheel," they both said at once in bored voices. "Always" I emphasized, trying to keep the emotion out of my voice. "Keep your hands where they can see them. Don't do anything without being asked. Take your registration out of the glove compartment slowly and only when they ask. Please take this seriously. If they ask you for your driver's license you reach for it slowly and tell them what you're doing: "I'm just getting it out of my wallet, Officer."
And remember always address them as Ma'am, Sir or Officer."
"Okay mom."
"This is serious."
"Okay mom."


"Lily?" I pulled myself out of the memory. I grabbed the salsa verde from the refrigerator and sat down at the table with Scottie handing him a plate. "I don''t know if this is helpful, but did I tell you why I started telling them what to do if they got pulled over?"
"I don't think so," she said. "Maybe..."
"It was because of this mom from Miles's school and her son, 'Eric?"
"No, I don't think you told me."

"Okay, so this kid 'Eric' and Miles are the same age. Eric is one those magic teenagers who is good looking, sweet and kind and gets unbelievable grades. Hearing his mom talk about him it is hard not to compare him to my kids. I mean, I try not to compare my children to anyone's else's kids. But ​some people​ make it very challenging, you know what I mean?"

Both Scottie and Lily laughed, "Yeah," said Scottie. "And I know who you're talking about too!"

"Eric," I continued, putting my hand on my hip and adopting a higher voice, "worked all summer and made enough money to pay for his own car insurance. Eric got a humanitarian award from the city for his work with the homeless. Eric got all of his friends to help raise money for a prom ticket for a kid at his school who couldn't afford to go."

Lily was laughing at my mimicry. Scottie smiled as he spooned more salsa on his quesadilla.

"But then one day, a group of us moms were all chatting after a meeting, and she said this, 'Eric got pulled over in his new Audi and argued his way out of ticket. He was actually quite arrogant about it.' She was laughing. I just stared at her in stunned silence.
'I told him,' she continued, 'that he shouldn't speak that way to police officers, but I was secretly quite proud of him for standing up for himself.'
While other mom's chimed in with stories of their own children's bravery (and audacity), I quietly excused myself, walked outside and closed my eyes. The tears were already forming.
My heart was pounding in my chest with the un-fairness of it all.

And I thought, ​My kids will never be able to do what Eric did...

"It was then, Lily" I said, snapping myself back to the present, "that I started quizzing Miles and Justin about what to do if they got pulled over. As a young, White teenager, maybe Eric could
argue with the police and get away with it. But I'm not willing to take that gamble with Miles and Justin. Whether they're behind the wheel or whether they're a passenger, when those flashing lights appear in the rearview, all bets could be off. So I take every opportunity to tell them the same thing over and over and over, in the hopes that some of it will stick. Like, keep your hands where they can see them."

"Yes!" said Lily, she sounded excited. "That's exactly what I mean. Like I said, no one would have ​ever ​thought to teach me about that. But that was kind of just the beginning," she continued. "Suddenly it was everything. It was the way that people looked at you and Daddy when you were walking down the street holding hands. It was the way people looked at all of our faces one by one when we showed up for a reservation like they were trying to figure out who went with who. People were mostly polite about it, but when I'm with you guys, people don't see me the way they see me here in Stowe, they see me as something else. And that is what I think I'm going to write about. I want to explore what it feels like to be who I am in our family, when we're by ourselves ​and​ when we're out in the world."

I looked at Scott with a look that said "d​o you know how amazing that is?"
He nodded and started validating her experiences with some of his own.
"You remember how when we went rafting and the guides were like,'well we know who's kids are who's here'?
"Right, Daddy," she said. "They always say something. Even if they don't say it out loud, you can just tell what they're thinking."
"Lily," I said. "I think you really found something here. Something that will not only set you apart in the world of college admissions, but something that will set you apart in the world." 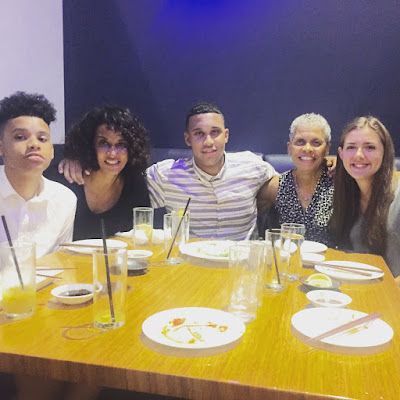