If Cousin Pookie Could Vote...

I was a "page" (an usher)  at the 1984 Democratic Convention in San Francisco.  Me and my 80 or so "page"-compadre's beat out hundreds of young hopefuls to get these coveted spots that paid $40.00 per day (minus your uniform rental) plus lunch.   I'll never forget entering the Moscone Center that first day before they loaded in the delegates.  The air was electric with the sound of "mic-checks" and  shoe heels clicking on the hard floor between the carpet-aisles.  I was given the great honor of guarding the section directly next to Coretta Scott King and her four children, Martin Luther King III, Yolanda King, Bernice King and Dexter Scott King.   On July 18, 1984,  I stood at my post (in my standard-issue burgundy blazer) and watched tearily as Jesse Jackson delivered his emotional, keynote address on poverty and power.  Dexter Scott King, who sat on the end of the row, saw my tears and offer me a handkerchief (no one had ever given me an actual linen hanky before, I didn't know whether I should have given it back or not after I'd used it).
"You're most welcome," he said after I'd thanked him and handed the hanky back to him.
I was struck by his speaking voice — it was so eerily like his father's.  I couldn't bring myself to look at him and yet I couldn't stop staring at all of them.  I was standing next to Black-American royalty.  They were all so regal and elegant.
As the convention-day ended, I was small-talking with another page from across the aisle ( I don't remember her name) and someone walked over to us from the King "row" and invited the two of us to a gathering at nearby hotel suite where Jackson himself was to be the guest of honor.
We both squealed "Yes!" and squeezed each other's hands not believing our good fortune.  We had been chosen!
I was 19-year's old.
Hours later, I found myself in the suite with 40 or so other invited guests. My blazer and purse were thrown casually on an entrance-sofa piled high with coats and bags.  I was perched on the arm of Dexter Scott King's leather chair, (at his invitation)  listening intently and respectfully as Coretta Scott King and Jesse Jackson traded stories about marching for voter's rights in 1960. I kept looking around in complete disbelief.

Here I am in a room full of people whose skin color had actually prevented them from even voting just 20-year's earlier.  And yet, these very same people have affected more change in the last 20 years than most people do in several lifetimes.

And hours earlier, these same legendary men and women had stood at the podium of a convention that selected the man (and woman!) who would compete to be elected to the nation's, nay —  the world's most powerful office.
My mind was blown and I was on fire.

After the convention ended, I immediately volunteered to canvass door-to-door for the then-Democratic nominees,  Walter Mondale and Geraldine Ferraro. Until that day in the hotel suite, I'd never believed that any action on my part could really make a difference.  That night, listening to Coretta Scott King and Mr. Jackson, I realized that not only did my actions matter, but that my IN-actions mattered as well.  Not voting was a vote for the opposition.  Not campaigning was campaigning for opposition.  My vote matters, my voice matters.  I learned that it's not only possible to make a difference -- my vote, my actions could make the difference. 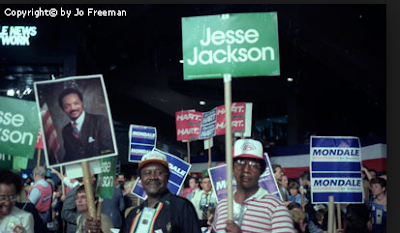 I moved to Los Angeles in 1988 and set about campaigning for Dukakis and Bentsen.  Texas Governor, Ann Richards, had delivered the keynote speech at that year's convention and inspired all of us democrats to go out and "spread the word!"  I showed up the next day at the store-front registrar's office on Wilshire and La Brea, got a clip board with 50 sheets attached to it and was given a neighborhood to canvass.
I started at 9:00 am and went door-to-door for five hours that first day.
"Hi, my name is Laura Cathcart!  Are you registered to vote?"
The second day I started at noon and stopped at 5:00pm.  The following day I started at 11:00 and went until just before 4:00pm.
Almost no one in that mostly White and Asian, Hancock Park neighborhood opened their door for me, I had to hand in an almost-empty single sheet at the end of the week.

In 1992, I felt the most hopeful about any election so far.  Bill Clinton and his running mate, Al Gore, were getting people excited!
Humming "Don't Stop Thinking About Tomorrow," I strolled back in to the registrar's office to see if I could set-up a booth at The Fox Hills Mall.
"Good luck registering voters over there," said the bored looking woman, who handed me my "Register to Vote Here" sign.
I smiled and nodded back enthusiastically, thanking her.
"I don't think I'll need luck!" I shouted over my shoulder on the way out.
Even if she wasn't, I was confident that these two men could end the 8-year Republican hold on the white house.  They really seemed to understand and care.  And I was positive that there were people in THAT district who felt the same way.

I bet I'll have a long line!  I should probably set up near the food court...

3 discouraging 4-hour-days (and several Hot Dog on A-Stick meals) later, I turned in two sheets with 16 scribbled names, illegible, partial addresses and some drug dealer's pager number (meant for me).  I was defeated and humiliated.

This S#@# is so hard!  Don't people know what's at stake?  Don't they know about the blood, sweat and tears shed so that we could have this privilege?

I married Brian in 1997 and in the year 2000 he and I were invited to a friend's house to hear then-President Clinton speak.  He was touring the country stumping for Vice President, Gore.  Miles was 2-year's old and Justin was just a few month's old (maybe 6?).
It was a magical night.  President Clinton played the saxophone and made his own dinner plate from the soul food buffet. Eric Clapton and our host, Kenny "Babyface" Edmonds played "Change the World" on their guitars. 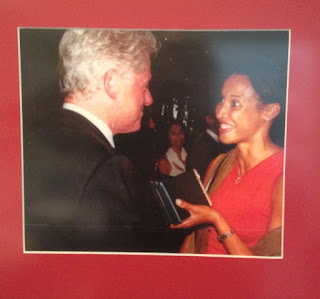 As the evening ended, I walked up to President Clinton and told him that I'd been campaigning for the democratic party for the past 17-years.  And for 17-year's all I'd really known is that I didn't want the republicans to be in power.
"But tonight, listening to you, I finally understand why I'm a democrat," I said.  "Thank you for your service to our country and for helping me see so clearly what is possible."

I was inspired again.  I held faith even as former Vice President, Gore lost his Supreme Court "chad" battle (that still makes me sad).  I weathered the storm of the eight "W" White House years that propelled us head-long into the recession (from which we're still laboriously extracting ourselves).  In 2007, hope came alive again (for me) when then-Senator and Presidential nominee, Barack Obama, gave a speech at an event to commemorate the 42nd Anniversary of the Voting Rights March.  He was joined by then-New York Senator, Hillary Clinton, her husband Bill and Congressman  John Lewis. In that memorable speech, he talked about the history that had lead us as a country to time where people had to risk being hosed-down, shot and/or trampled in order to continue to march for a right that was actually already afforded to them by the US constitution.
"If Cousin Pookie could vote," he said toward the end of speech, "get off of the couch and register some folks to go to the polls, we might have a different kind of politics." 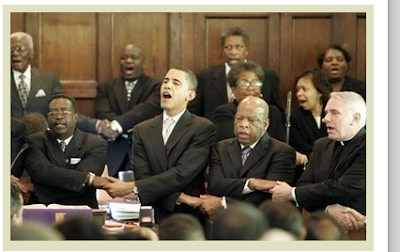 If Cousin Pookie could vote...

I thought that the 2008 and the 2012 presidential elections were the most important elections, in which I would EVER cast a vote. But I think I was wrong. This one here -- this match up on Tuesday, November 8, 2016, may indeed be the most important election in my lifetime. Scottie and I had the honor and privilege of seeing Bill Clinton this past spring, stumping for his wife (amazing thing! He vividly remembered so many details about the night that I'd met him 16-year's earlier!). Bill broke it down for the small crowd at our friend's home and explained how incredibly crucial this election was — and how vital the right choice was to our collective futures. I heard him that evening and fell in love with this election process all over again.

My vote will make a difference.

Last month, I asked him if he wanted to do his ballot early and mail it in.

He took so long to answer that I looked up from what I was reading with a questioning look. He was staring at me as though he had something to say.

"What?" I heard the crispness in my voice.

"I don't want to vote by mail," he said slowly. " I want to go with you, Mom. I can be late for school. But this is important, Mom, right? I want to cast my ballot in person in my first election."

But you have a civil rights test first period on Tuesday and you have an English project to turn in that can't be late..

I opened my mouth and then shut it again quickly.

I gently put my hand on the back of his head. His hair was growing out from the previous week's haircut. I could feel the downy new growth on the nearly shaved-clean nape of his neck.

"You're right Miles -- you should vote in person. And yes, you can be late for school that day. And yes, you're right, this is really, really important."

So, Miles and I are planning to cast our votes for president of the United States and all of the equally important "down ticket" races and ballot-measures just as soon as the polls open on Tuesday, November 8.

And I sincerely hope that "Cousin Pookie" and all of his kinfolk will be voting that day as well.

Posted by Laura Cathcart Robbins at 9:52 AM