Marriage is a Piece of Paper

I was walking up the escalator at The Galleria (yes, walking.  I don't like to just "ride" up escalators — it makes me anxious, I need to be moving) and I saw a younger-than-me, Black guy from the corner of my eye walking up quickly behind me as if to pass me.  But instead of passing me he stood on the escalator-stair just below me and said in a soft voice.
"Don't be afraid, please."
This, of course, put me on high alert.  I slowly turned my head and glanced at him to see if he looked crazy.  But he just looked curious.  He was shorter than me, brown-skinned, had a pleasant face and close-cropped hair.  He was someone I could pass a thousand times on the street and not notice, but in that moment I was keenly aware of his presence.
"I'm not a mind reader," he continued.
It was a voice you would use if you were trying to coax a kitten toward a saucer of milk.
"But I know that you're going to answer my next question in one of three ways:

1) It's not a good time in your life, so you're emotionally unavailable
or
2) You have a boyfriend
or
3) You're married."

He's hitting on me!
I smiled back at him (actually I think I laughed out loud — no one ever hits on me anymore)!
"You're right," I said with as much kindness as I could.  "I do have a boyfriend."
He shook his head and furrowed his brow as if he were pained my admission.  We both exited the escalator and then he turned left to ride the "down" escalator back to the main level.
Maybe he does this all day long.  Rides up and down the escalator using that same line.
He smiled at me again as he started to descend and said in a louder voice, "Well, I'm glad you're not married.  Maybe that means I'll still have a chance one day."
I then found myself in an all too familiar position: Feeling the urge to defend my relationship.

But he's not just my boyfriend!  He's the man with whom I'm choosing to spend my life.  And P.S., the word "boyfriend" isn't code for: I'm waiting for someone to come and "wife me!"

I opened my mouth (to say what, I don't know.  I didn't actually want to have that conversation with a stranger and plus, he was halfway down by then).  But instead I just waved goodbye nervously and turned right toward Burke Williams.

The following week, Scottie called the gas company to come by and check out an ominous smell in our kitchen.  Scottie had to leave for a workout so I stayed home to wait for them.  The gentleman who showed up was a strange, little dark-skinned guy with round eyes and razor bumps on his face and neck.  And 20-minutes later (after verifying that there was no gas leak) our courteous conversation took an odd turn.

"So, you said your boyfriend is the one who placed the call for us to come out?"
"That's right."
"Well, I'm just going to say it," he threw is short arms in the air above his head.  "He's messing up!"
"I'm," I faltered, "I'm sorry?"
"He's messing up!  He should have married you by now for sure!  How long have you been living together?"
I side-stepped his question as I started walking toward the front hallway, eyeing the knife holder on the kitchen-counter next to him (one..two..three giant steps away)! I counted silently.
"So, is this your last stop today?" I put my right hand on the front door knob, twisting it silently before pulling the door open. I held my cell phone in my free hand.
"I'm just saying — he's messing up," I saw foamy, yellow, spittle in the corners of his mouth as he shuffled by me on to the porch.
"Men don't know what they have, you know?" he continued as he walked backwards down the front stairs, keeping eye contact with me.
"But if you ask me, he's a fool to let a woman like you slip through his fingers!"
I forced a polite smile before I said goodbye.  Once I was sure that he was gone, I pressed my back against the door and breathed out a sigh of relief.
What the F*@#%?!  He was totally triggered by the lack of a diamond on my left hand!

There are about 35 words in Webster's thesaurus for marriage.  There about half that many for divorce.  But there are no known synonyms for unmarried.   I'd like a synonym you see, because the word "unmarried" doesn't cut it for me.  I need another box to check.  I have a boyfriend, we're in love and we live together so we're choosing to be unmarried life-partners.  Where's that box?

So, here's the deal - Scottie and I have made a conscious choice not to be married.  We both had long-term marriages before, we've each had two children who are now in their teens (well, Nora will be a teen in March)!, and we've both been through the pain of divorce.  We found each other at a very tender time — we were early in our respective recoveries, I was newly divorced, he had just gone through his 2-year's earlier.  The very fact that we'd had found each other at all seemed (and seems) miraculous to us both.  We are mindful of the fact that what we have is unusual.  It is love without a price tag or an agenda.   And truth be told, Scottie tells me all the time he would marry me.  We've daydreamed a bunch about what that would be like, what having kids would be like, what our lives would look like — married.  But in the end we just really love what we have (and plus I'm 52 - and I ain't birthin' no babies)!.
Why tinker with this magic that is our relationship?  Who gets this the second time around?  That's kind of where we are.

So why would it legitimize our relationship to the escalator guy or the creepy gas company guy if Scottie would "put ring on it?"  Why isn't our loving, thoughtful, respectful and at times, wildly romantic relationship "legit" just as it is?

And it's not just the creeps (and seemingly)  nice guys on escalators.  But it is also our community of loving friends who seem to be waiting for Scottie and I to "upgrade" our relationship status.

"When are you guys getting married?"
"Maybe you'll get married when the kids graduate?"
"Do you think you guys will EVER get married?"
"Awww, that's too bad," (when I answer that we're not planning to get married).

But okay, I understand.  I do.  You guys (our friends) are rooting for us.  You see it too — what we have.  You want us to succeed.  I get that.  I also get that for some of you — maybe loving somebody as much as we do — as obviously as we do, means having a wedding ceremony and a marriage license (which, also means having your individual assets become community property - unless you have a prenup).  I know that there is security in marriage.  I took great comfort in it when I got married to Brian in 1997. Getting married was evidence to the world at-large that we loved each other enough to commit to our relationship on paper and take vows of devotion and fidelity in front of our friends and families.
But the thing is that Scottie and I are secure without the vows, signed-papers or ceremonies.  At the moment, we don't feel as though we need any additional reassurances from each other.  And we're not taking this lightly.  On the contrary, we entered this "union" reverently, advisedly and soberly.   We waited for 6-years before we moved into together (we REALLY wanted to be sure)!.  And right from the beginning, we've always set-aside romantic time for each other on a regular basis (vacations, movies, plays, dinners, concerts. Etc).   And although my intention is to grow old with Scottie, I'm open to whatever happens. We're living this life of ours day-to-day, hand-in-hand.

"But what if one of you leaves just because things get a little rough?" asked the same friend who sent the text in the picture.  "When you're married, it really makes you think twice before walking away from someone."
"But that's what I love the best!" I said excitedly.
"I don't ever HAVE to be with Scottie.  I am only with him because I love him and I really want to with him.  There is no obligation in what he and I have.  To me - that's the real beauty of it.  I light up the moment he walks in to a room.  Not just to make him happy or because I want to appear the 'dutiful girlfriend' - I light up simply because he lights me up.  I stay because I want to stay — and he stays for the same reasons."

And to be perfectly honest, I get a little resentful when people feel sorry for me because we're not married.  I know it makes it harder for you to put us in a box.  But please, we're good -- really.  And if one day we find ourselves feeling like we want to take vows in front of our friends to honor what we have together, then we will.  But right now, no judgement or pity required.  We're are blissfully unmarried partners, boyfriend/girlfriend, choosing to share our lives with the other.

And although I don't need a ring, Hon. I wouldn't say no to one or two Cartier "Love" bracelets.  Christmas is coming...! 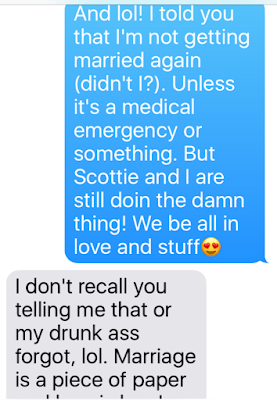 Posted by Laura Cathcart Robbins at 9:48 AM