For Medical Use Only...

The day after Justin turned 17 last week, my brother Kenji brought over a some home videos.  One of the videos was of Justin and Miles in 2008.  In the video, I'm sitting at the kitchen table in our old house, unpacking a giant box of Legos, handing them each the tiny pieces one-by-one.  Justin is sitting next to me and Miles is sitting across from the two of us. As they fit the pieces together, they had an extremely cute conversation about Miles's birthday.  Kenji must have been next to me filming them. I don't have any memory of that afternoon.  But I haven't been able to stop thinking about how little they both looked.  Justin was 8 and Miles had just turned 10 (according to their conversation).  Justin was a third-grader at The Buckley School and Miles was about to transition out of Buckley and go to another school for 5th grade.

It was also the year that I entered in to treatment for a drug and alcohol dependency and the year that Brian and I got divorced.

They couldn't have been that little then!  Weren't they older?  Didn't they sound older?  That's what they looked and sounded like at 8 and 10?  How could that be...?

Yes, divorce is hard on families.  It's hard on friends.  It's hard on the kids.  That's probably the most heart-wrenching part.
It was certainly the heart-wrenching for me.  But sitting there watching that video last week, I was transported back to the winter of 2008. Back to the moment where I realized that one of the many results of my divorce was that I would no longer get to be with my children all of the time.

How can I be away from them — ever?  How can I not put them to bed every night and kiss them awake every morning?

The legalities of the divorce proceedings lived up to the hype.  It was a nightmarish "Groundhog's Day" of waking up with a pit on my stomach (if I slept at all) , smiling for the kids, getting them to school, going to the lawyers's office, going to a meeting and then picking up the kids from school with a fresh smile.   But thank God Brian and I were actually able to avoid the nasty court battle and figure things out in mediation (see my blog posts "Our unconventional arrangement" and "The Saxophone Solo").
But the day it became real, the Friday that I realized I was facing my first few days and nights in my home alone without them-
I didn't think I could get through it.  My panic was visceral.  Grief filled my body like lead.

I don't remember Brian picking them up that evening, but I do remember crumpling up into a ball on the cold, marble floor by the front door after they left and crying silently until my eyes were red and swollen.

My soul was hemorrhaging.  I carried myself up stairs, gripping the bronze railing with both hands.  The 600-foot hallway was dark and seemed to be longer than it had been when they I was screaming for them to stop running up and down it hours earlier.  I stood in the doorway of Miles's room and his motion-sensor night-light kicked on, bathing his room in blue light.   I sat down on the smooth,  dark-wood hallway floor and willed myself to stop crying.

Around the same time of year in 2008, Scottie was trying to be figure out how to be a dad to then-9-year-old Lily and 4-year-old Nora.  He was dealing with some gnarly legal issues and had been counseled by the judge who presided over one of them, to relocate out of state as soon as possible. He had already planned to visit Los Angeles, but now it looked as though he might stay for good.  The days that he spent alone, adjusting to life here without his support system, were as harsh as the unusually gray LA winter.   Here, he was one of thousand guys in early recovery with no visible means of support.  He was a displaced Park City skier and fly fishing guide without snow or a river.  We would sit next to each other at recovery meetings and sometimes go to breakfast or lunch afterward.  On paper, this newly sober, outdoorsman was about as unlikely a match for me as one could be.  And in any case,  I had no energy or desire to enter into another relationship.  I truly didn't want to be around anyone but my kids.  I was in what felt like the darkest days of my life, and I was too scabbed over to let anyone in to help me.  My family and friends who loved me so, had watched from the sidelines for the past few years while I tried to pull myself out of the mire that had consumed me.  Once I was out, I was too ashamed of my journey to ask anyone for help.

"Do you want me to come by?"
It was the second weekend without my kids.  I had gotten through that first weekend, but it was one of the hardest three day-stretches of my life.  My kids arrived back that Sunday evening to find me smiling and cooking dinner, but inside I think I had died a little.  I felt myself shutting down.
No, Scott, I don't want you to come by.  I don't want to see anyone.  What I want is to put my kids to bed tonight.
"I don't think so," I said forcefully.  I hated the sound of my own self-pity.
"Okay, then a meeting," his voice was cheerful,  as though he'd misunderstood the rejection in my voice.
"And Menchie's afterward?"
I wanted to stay home and make more photo albums.  The weekend before I had organized their baby boxes.
Justin's curls from his first hair cut!  Miles's baby teeth!
"Oh, " I sighed.  "I'm sorry, but I don't think I'm up to it."
"Okay, no Menchie's, then?  Just the meeting?"
I was annoyed with the corners of my mouth for smiling.

Later on at Menchies, eating my chocolate frozen yogurt with marshmallows, brownie bits and rainbow sprinkles, I found myself laughing at Scottie's imitation of someone we had run into earlier that evening.  I was surprised to find that the agony which had my constant companion had dissipated a little.
Just a little...
I found that I almost unwilling to admit it to myself.  Did it mean that I loved them less if I wasn't consumed my the grief of their absence?

"This is good for you," said Shelly later on.  "Like medicine!" she laughed.  "It's okay that you have a life outside of taking care of your kids your kids 24/7.  Enjoy your time with that man!"
"But I miss my kids so much."
"Okay," she ventured.  "Miss them, but that doesn't mean you can't do both.  It's not healthy for you to just sit around missing them.  Scottie is a good guy.  I really like him.  He REALLY likes you.  Enjoy this time."

The following weekend we went to meetings both Friday and Saturday night.   Eventually, Sunday started with an early morning meeting and breakfast afterward.  More than once, I felt myself on the verge of asking my friends to meet me for dinner or a movie, but the request for help stuck in my throat.  But with Scottie I didn't have to ask.  He was just there.  I couldn't really metabolize or explain what was going on with he and I.  There was just something about the way he looked at me.  Something about the way he made me laugh when no one else got the joke.  He didn't seem to be after anything, there was this innocence about his curiosity.  When he first met me he told me that all he wanted was to be near me.  Without any further evidence, than his words and a feeling, I began to believe him.

I don't envy people who have to do what I did without their "medicine."  Scottie, for me, is that "just right" elixir that blended with my recovery-work and helped me to heal.  I am filled with gratitude for all of those days he spent patiently next to me, while I was tight with worry and anxiety.  I honestly don't know what how I would have gotten through it without him.  Shelly was right.  He is good medicine. 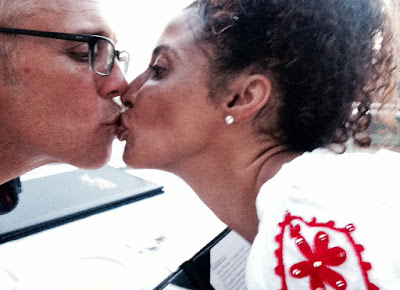 Posted by Laura Cathcart Robbins at 10:47 AM