I have flashbulb memories of Thanksgiving, 2008.  Just these bright bursts where I can see things like my kids sitting at the table eating, I can see Brian and his family members laughing and joking around.  I can actually remember glimmers of the conversations I had:

"So, is your Dad coming here for Christmas?"
"No, we're going to see him in Florida over the break."
"I love that picture of Justin in his halloween costume! What was he again?"
"Spongebob."
"Oh, right..."
Like it was yesterday, I can see myself mumbling "excuse me," walking into the powder room and running the water while I pressed my clenched fists against the cool, porcelain sink.
"You can do this," I said to myself in the mirror.  "You are doing this."
When I felt my nails digging into the tender, fleshy part of my palms, I turned the water off, fake-flushed the toilet and walked back in to the living room with a smile on my face.

Brian and I were mid-divorce.  Oh - and 102 days earlier I had "graduated" from The Meadow's treatment center and returned back to the home that we shared in Studio City.  We'd decided that we would do Thanksgiving in our second home, that year.  A home that I hadn't set foot in since my return from treatment in August.
"The boys can spend the night here with me afterward," he said.  "Let's try and keep Thanksgiving  as normal as possible."
I nodded in agreement but inside my head was exploding.

Normal?  What's that look like now?  I don't have a normal anymore.  I don't even really know what that word means.

Walking through the front door that night, was like starting a tour of the shame and pain that I'd experienced in that house just 6-months earlier:

If you look over here folks, you'll see the sofa where on July 4th, she told her friends to take her kids and go see the fireworks without her because she wasn't "feeling up to it".  Over here at the kitchen table you can see where she sat in the dark for hours trying to figure out how to answer the near-daily question, "Why is Mommy so sad?"  And lastly, here in the walk-in closet off of the master bedroom, you can see where she used to hide her pill-bottles in her rain boots...

After the dinner was all put away in tupperware containers and aluminum foiled-covered plates, I kissed and hugged the boys goodbye at the door with a smile I didn't know that I had in me.

"It's just for one night," I said, as I pried Justin's arms from around my leg.   "I'll see you guys first thing in the morning!"

"No, Mommy, stay!"
The sky was a blanket of shiny pin-points on black velvet.  There wasn't much light on the road to PCH, but I knew it by heart.  I was gripping the steering wheel so hard that my hands started to cramp.

Christmas that year, felt just like Thanksgiving, except that we did it at my house.  Everything was a blur of family and befuddlement.  I didn't want to talk to anyone.  I didn't want to make Christmas dinner or go to the meeting on Christmas Eve (as it been suggested).  I didn't want to shop for presents and I really didn't want anyone to get me anything.  Decorating my house was only slightly preferable to eating the glass ornaments that were hanging on our tree.

I knew it had to be done.  I knew I had to show up, but I didn't know how.  Nothing felt right anymore.  Nothing logical made sense to me.  I yearned for a break.  Just an hour or two when the discomfort in my head didn't scream out for oblivion.

I had never been more conscious of anything in my life than I was of the glass of sparkling water and lemon in my hand, while I was hostessing Christmas dinner.  It felt obnoxiously loud, clunky and cold.  It seemed as though everyone was staring at it with a mixture of sympathy and apprehension.  Conversely, those drinking red wine (with their index fingers gently caressing the curvature of the glass as they talked), seemed much more at home in my house than I was.
Are you really still sipping on your first one? Just drink the damn glass people!
I watched my kids open their presents hoping that each one was the last one.  I wanted everyone to go home.  I wanted to get under my covers and watch Seinfeld.

Is this torture almost over?

I don't really remember much about New Year's Eve that year.  I'm pretty sure it was just me and my kids cuddled up in my bed.
But what did happen for sure is that I woke-up on New Year's Day, 2009, (instead of coming-to) snuggled in-between my two boys.  I remember drinking in the moment while my eyes adjusted to the gray light that filtered through my bedroom blackout-drapes.

I made it.  The Trifecta was over.

The following year it all began again.  Yes, of course, the 2009 Trifecta was slightly easier; I was no longer mid-divorce and I was more than a year into my recovery.  I had been through many of those awkward "firsts" (first school-fundraiser by myself, first Mother's Day with just my mom, my kids and me, first birthday [46]! as a divorcee), and I had survived.  But during the holiday season, I just kept my head down, like one walks through a blizzard, and ticked off each holiday, one by one:

Sometimes I stare at the holiday photo-cards my friends send out (on time no less!) and wonder is there anyone else who experiences The Trifecta like I do.  I mean, yes — it's much easier now.  I'm easier in my skin.  I no longer yearn for a cocktail or a sedative to make it through a family dinner.  At the beginning of the 2011 Trifecta, Scottie and I planned a sober New Year's Eve gathering for a few friends who didn't want to spend their first "champagne-less" New Year's Eve by themselves.  Now it's become and annual tradition for all of our friends who want to escape the pressure of this "hangover holiday" (and have some amazing tamales!)  Last year, we had almost 70 people in our home, bringing in the New Year with a sparkling cider-toast at midnight (some in recovery, some not).

Every Trifecta season seems to bring with it a new transition.  Something else to deal with and push through.  I'm learning how to keep my balance as I navigate the "big three" every year.  I'm learning at Christmas time, not to buy presents for people that I don't know with money that I don't have.  I'm learning to keep my own gatherings small and simple.  I'm not good at caterers, base plates and crystal.  Holidays at my house are very "mismatched place settings," and family style everything.  Scottie and I don't go to a ton of holiday parties.  When the kids go on break, we kind of tuck-in and binge-watch TV shows or go to the movies.  I do look forward to New Year's Day, but mainly because it means that once again, that The Trifecta is over.  But I'm open to a new Trifecta experience every year.  Who knows, the 2016 Trifecta could change my mind.  But my guess is that I'll wake up on New Year's Day 2017, with the usual Trifecta-induced panic, followed by the relief that comes with the knowledge that there are no more family holidays for another eleven months. 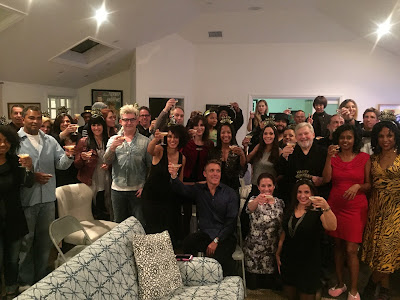 Posted by Laura Cathcart Robbins at 10:20 AM