We Gon' Be Alright (or 10 Good Things About Tuesday's Election)

I had a dream on Tuesday, November 8, 2016, that I was standing across from my betrothed, about to say, "I do," when a sniper's bullet suddenly took off his head.   I spent the rest of the dream walking around in my blood-spattered bridal gown in utter and complete shock and grief. Wondering...

I was stunned to see that the sun was shining this Wednesday morning.  I was amazed by the phone calls and emails that came in like nothing had happened.  I could feel grief and despair clawing at my ankles, trying to pull me into their murky depths as I was picking Justin up from school.  I felt myself submitting to yet another wave of fear and despair when Kendrick Lamar's "We gon' be alright" came on the radio.  The words filled me with something else for a moment and seemed to block the fear-waves that were making my stomach flip-flop.

"I know it's hard baby," Beverly has said to me over and over again. "But let's take a look at what you're grateful for."

In program we call this a "gratitude list."  I  know several people, who say things like, "I didn't know what else to do, so my sponsor told me to write a gratitude list and once again, as soon as I finished writing, I felt relief!"

Many of these same people also credit this process for actually "manifesting" authentic, honest-to-goodness real-life gratitude.
I myself have tried writing them a few times and honestly found the process to be lacking (for me), but that was before the world ended or BTT (Before Trump Tuesday).   Wednesday morning, I was all, "desperate times require desperate measures," so when I got home, I sat down at my computer and began to type:

I can't bring myself to say  "I'm grateful for anything" just yet.

I put my fingers on the keyboard again.

10 Good things to come out of this election:

Okay. I might be able to live with that. Here goes nothing!


1) I got to go the polls with my son, Miles who voted in his first-ever presidential election.
It was pretty awesome.  We were up at 5:30am and in-line by 6:00am.  To be able to participate in this process with my son was an experience I wouldn't trade for the world.  I was so very proud of him when he "allowed" me to take his picture with his "I voted" sticker on.  It felt like one of those old MasterCard commercials:  A cup of coffee while you wait in line to vote — $1.75.  Taking your 18 year-old's picture after he's voted for the first time?  Priceless.


Our first African-American/Indian-American Senator!  But even without her refreshing ethnic mix, this woman is smart, driven and very, very, likable.  She is good friends with a friend of mine and my mom and I had an opportunity to hear her speak this spring.  She was moving and magnificent.  A well deserved win.  More than anything else that came out of this election — she gives me hope.
3) Trump's win brought a lot of my "Facebook communities" together


So many of my Facebook friends (who would normally not mix) were "liking" each other's posts, sharing personal fears and supporting and comforting each other.  I have never seen such a "coming together" on Facebook before.  I'm sure that it would have been similar on 9/11 (if there had been social media then). 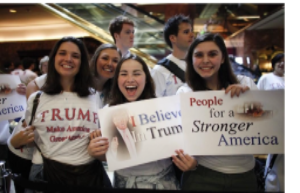 Yup -  I know a few people who rallied for him on the down-low, but very publicly celebrated his win on Wednesday (thus, revealing to me their true natures).  Had he never been elected, I may not have ever known where they stood on these highly personal matters that affect me so deeply.  Good to know, people.

5) Hillary's concession speech:
I thought Hillary's concession speech was maybe the most gracious and inspiring speeches she's ever given.
I had tears in my eyes when she acknowledged and thanked Barack and Michelle Obama for their graceful, determined leadership.  And the tears spilled out as she addressed her supporters ("the young people in particular") when she said, "This loss hurts, but please never stop believing that fighting for what's right is worth it."

6) It put things in perspective:


All of the loud, little petty issues that were at giving me headaches and shallow breath were suddenly silenced when I woke up on Wednesday morning.  Tuesday (pre-results) I'd made a "To Do" list for Wednesday with items underlined to emphasizing their importance:
Track Amazon delivery!
Talk to manager at autobody shop and make them to pay for tracking device they lost when they fixed Miles's car!
Leave gala meeting on time so you can pick Justin up right at 3:15!


But come Wednesday, it went kind of like this:


Still no delivery from Amazon? Okay, I'll check on it tomorrow.
"Oh, you can't find the tracking device?  I guess I'll just order another one. Thanks for checking though!"
"Siri - text Justin that I'm running late and I'll be there closer to 3:30"


I can't be rattled by those kinds of things when there's all of this "high-stakes" stuff to worry about now (our civil rights, Roe V. Wade, the Muslim ban, immigration reform, etc...).  "Don't sweat the small" stuff has taken on new meaning for me since Tuesday night.

7) The DOW plummeted Election night, but then soared up and gained 256 points on Wednesday!


Of course, it was mostly financial stocks, oil stocks and defense stocks (which is kind of disturbing), but at least people were buying.  I'm not sure if it's an actual indication of anything, but Wall Street seems to credit the bounce to Trump's victory speech.  A speech which, some say raised hopes that he will focus on policies that will help the economy and not follow through on some of his "extreme campaign positions."
8) Proposition 56 (The Cigarette Tax) passed in California:
Sorry smokers, but I'd like to have as many barriers as possible between Miles and Justin and the possibility of a first-puff of a cigarette.  I know it doesn't ensure anything, but in my opinion this is progress toward to a healthier, cancer-free existence.


9) I now better understand how the Electoral College came to be (kind of):
My brother, Kenji broke it down for us while we were watching the election results come in.  Apparently, when the Southern states were struggling to hold on to their economic power, it was decided that they could be allowed to count their slaves as three-fifths of a person - thereby giving them the "electoral votes" to make laws, put officials in power and of course, elect a president.

10) I got to show my kids what to do in the face of a perceived tragedy:


Upon awakening on Wednesday morning, I was really tempted to stay in bed all day catching up on "Love and Hip-Hop Hollywood".  But instead, I got up, go my kids off to school on time, did some research for this blog and made it time for my noon lunch-appointment.  I figure that the worst case scenario had shown up - so I'd better too. 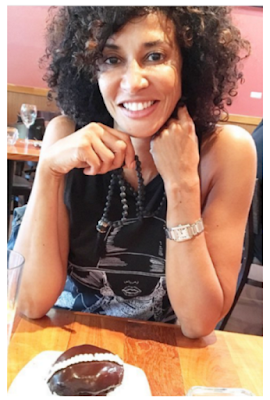 Posted by Laura Cathcart Robbins at 10:05 AM