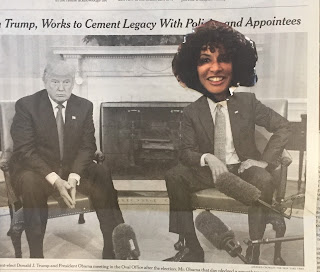 It's January and I've officially run out of TV shows to watch.
Shameless had its season finale. Homeland comes back on the 15th, and This Is Us won't return until next week.  Game of Thrones, House of Cards, Ray Donovan and Orange is the New Black won't be on until spring and summer respectively.  So a few days ago, I sat on my bed with my Sunday NYT and began scrolling through my "B-list" of banked-recorded TV shows (shows I'll watch in a pinch when there's nothing else on).  I always like to have something familiar on TV while I read the Sunday paper.  It's just one of my things.

I settled on an episode of Quantico from October (I really want to like her  - Priyanka Chopra, but I kind of lost interest last season and haven't been motivated to start the second one). I unfolded the SundayStyles section and started skimming through.  Two pages in, it started to get dark outside so I got up briefly to shut my drapes and turn on my bedside lamp.  Quantico proved to be the white noise that I needed.  I was fully immersed in the 2nd page of an article entitled, George Michael - A legacy of Fashion, when a news promo broke through my focus.

"Breaking News! - An Oklahoma killing spree comes to an end in a shoot out with the gunman."

I looked up with a start. Oh no!  Another killing spree?!? How did I miss that today?

"Nearly a week after the news the FBI is conducting a review of emails found on a laptop belonging to Hillary Clinton's aid, the race for U.S. president remains close."

Suddenly I sat up straight and pushed the pause button on the remote in my hand.  My brain struggled for a moment.  I could feel my heartbeat speed up. I stared at the frozen, close-up photo of Hillary Clinton's face.  My mind fought against the release of hope that had begun to course though my body.

It's recorded, Laura. It's from October - before the election.

But it was too late, I had already been transported back to what it felt like during those days before the election.    I was never Hillary's biggest fan, but everyone (that I knew anyway)  just knew that she was going to win.  In fact, my friends and I seemed to be collectively insulted by the fact that he was even allowed to take up ballot space.  We spoke to each other in restaurants and on cellphones in reckless whispers (laced with haughty laughter).

"Girl, you heard what he said about that judge?  Other countries must think we have lost our collective minds!  Imagine how they'll laugh at us if he actually wins!"

This would usually be followed closely by an automatic "God forbid!" or a "Lawd have mercy!"  As if we were all townspeople in a horror film, afraid that even joking about a Trump victory might bring unspeakable evil upon us all.

The truth was that, despite what I saw as a lack of "likability",  I felt completely safe with the idea of Hillary at our nation's helm.  She had the experience, intelligence and strength that I felt were needed when it came to creating and implementing both domestic and foreign policies.  Hillary was going to protect "love is love" and women's reproductive rights.  She was on "our" side when it came to "stop and frisk" and immigration reform.  She saw what "we" saw when she looked at Muslim Americans.  She understood the meaning of words like diplomacy, patience and tact.   And yet, Hillary wasn't taking no mess from anyone.  Candidate Hillary was a shot-caller.  The kind, I decided, come election day,  I would trust with my life.   (By the way, I thought the rest of you had also made the same decision.)

In October of 2016, my only qualm about November 8, was that we would be one step closer to saying goodbye to our beloved first family.
I see now what an egregious error it was to take that "pre- 11/9" feeling of hope and security for granted.  But I really just didn't know.  I didn't even suspect.

I sat up and folded the paper back together and continued to stare at the image on the screen.

How long before I feel that safe again?  Safe, like I did during the days leading up to November 9? Four more years?  Eight more years?!

It's not that I don't actually understand that she lost the election.  I know that she lost.  I know that Donald Trump is our president-elect.  And yet it's been so hard for me to metabolize how I FEEL about knowing these things.  So hard in fact, I've been avoiding my beloved MSNBC lately because of how often they talk about it.  I've even been avoiding booking anything on or around January 20th, because each time I scroll past it on my iPhone calendar, the date opens and proudly proclaims 1/20/17 as Inauguration Day! (okay -- true, there's no exclamation point, but that's how it feels to me).  I am well acquainted with this feeling, but I'm not used to having it around anything political.  The truth is that I'm having a hard time equating these feelings I'm having with the events that took place on and after 11/9.  It feels very EMOTIONAL.  It feels very PERSONAL.  It feels like I was blindsided by some kind of major betrayal.

When I was 24,  I was "madly and deeply" in love with a young man who lived in Maryland.  During our year-long romance, we saw each other as often as possible and wrote each other long, torrid love letters when we couldn't.  One day on a whim, I used my rent money to buy a plane ticket to Baltimore and left my flight information on his home answering machine.

Imagine how surprised he'll be!

When he picked me up from the airport, he basically told me that he was involved with somebody else and he couldn't see me anymore.

As I flew back to LA, (with my tears steaming up the airplane window), I prayed (pitifully) that he would see the error of his ways and come back to me.  For weeks after that, (if I could sleep) I would have this amazing dream that we were still together and that I had been wrong about his cheating.  When I woke-up, I tried to hold on to that dreamy feeling by keeping my eyes closed as long as I could.

But when I finally opened my eyes, I was always hit with the realization that it was true --  he didn't want me anymore.  I would then become flushed with a cold, heavy feeling that left my head ringing with pain. It was like being slapped awake with a glove that contained wet cement.

When I saw that October news promo, I felt like I did on those mornings (post-dumping) -- an acceleration of hope followed closely by an intense feeling of let down, bitter-disappointment and anger.

But the truth is on November 9, as baffled, angry and disappointed as I was, my life didn't actually change.   I mean nothing in my day-to-day life is any different than it was on November 8.   I still live in the same house with Scottie, my sons and our two dogs.  My bank account has remained the same, my circle of friends and family is unaltered.  I drive the same car, go to the same gym, etc.

I read a daily email meditation.  A few years ago, one of these meditations contained a story about an ill-tempered man who purchased a weekly lottery ticket.  He remained as ill tempered as ever, until one day he discovered that several weeks prior, he had actually purchased a winning ticket.
In a matter of minutes after hearing the news, he was filled with hope, joy and generosity.  But nothing had actually changed.  He hadn't cashed-in his ticket yet.  His bank accounts and pockets were still empty. But just knowing that he'd won gave him such a shift in perception that he could finally access feelings of love and security.

A shift in perception.

Knowing that inauguration day is actually looming before us has created the opposite shift in me.  What feels like a betrayal to me (i.e. the events that took place on November 8 and 9) have made me restless, fearful and on-edge.

I absentmindedly opened the front section of the paper and began to flip through it.   The crispness of the news-page between my thumb and middle finger has a sound that is both comforting and familiar to me -- it's almost musical, like a staccato swish, swish, swish.   I zoned-out on the sound as I thumbed through page after page, until a break in the small newspaper print caught my eye --

A full page ad from John Lennon and Yoko Ono? 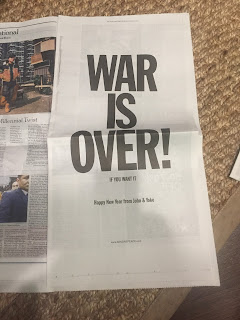 I felt my shoulders slump toward my chest.  I shook my head slightly from side to side.

That's what it feels like!  Like we're preparing for war.  And I feel like I'm suffering from another kind of PTSD -- Pre-Traumatic Stress Disorder.  Because nothing has really happened yet.  I'm just so scared of what I'm sure is on the horizon.

My gaze shifted to the picture opposite the "War is Over" ad.  It was that now-infamous picture of our president with president-elect Trump during their post-election White House sit-down.  To me, Trump looks like he's in shock or really overwhelmed.  Or maybe he just looks bored, like a 6th grader in a two-hour assembly on safety. 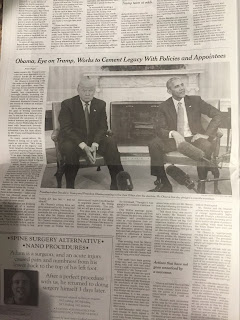 Our president is smiling.

Just two days after November's election, while the rest of us were either walking around in a zombie-like daze or celebrating (as the case may be), President Barack Obama took yet another opportunity to handle himself with the same level of poise and dignity for which he has always been known.  And unlike my life, our president's day-to-day life was immediately and directly affected by Trump's victory.  He had to get into right into action to protect his legacy and to keep his vow to ensure a smooth transition of power "no matter what."   And "no matter what" had happened.  Everyone knew it might be a close victory (hers, natch).  But no one, including him, had been prepared for the electoral-college vs  popular-vote "battle carnage," which started during the evening of 11/8, continued well into the morning of 11/9, and ended with a Trump victory - nay, trouncing!

Wow.  Our President managed to look attentive and fresh.  He even managed to smile.

Perhaps I can begin by simply following our President's lead and smile in the face of all of this.  I mean, I'm pretty sure were in for bit of a sh*# show come January 21.   But perhaps I can try and wait until if or when my life actually does change before I let what I know (or rather what I think I know), impact me  negatively.

I closed the paper and shut my eyes for a moment before pressing "play" on the remote.   Quantico came back to life and Priyanka Chopra's husky voice filled the air around me.
Posted by Laura Cathcart Robbins at 9:17 PM