What a wonderful world.... 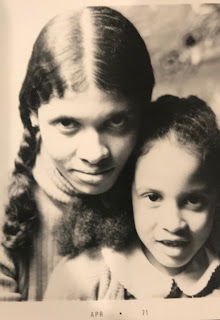 My mother came of age at a time when "the signs were still up." Which means that she grew up when there were still "colored" bathrooms, waiting rooms, water fountains, entrances, etc. (mainly in the southern states).  I've heard her heart-wrenching stories about how she and her Black classmates at her Catholic school in Chicago were regularly referred to as "dirty savages" by the nuns who taught there.
The lines were drawn everywhere.
When she once crossed that "invisible line" into an adjacent White neighborhood, the unkind remarks and stares of open-hostility sent her scurrying back to her own block.
At age five, she was placed in the "colored ward" for a tonsillectomy.  Her terrified questions were met with cold silence by a stern-faced nurse. (The nurses wore starched, light blue uniforms and caps with blood-red crosses).  When those doctors and nurses saw my five year-old mother, they didn't see a scared child, they saw a colored girl.


At 3:23 am on August 27, 1964, my mother gave birth to me in the negro ward at Cook County hospital. My deeply creased, carbon-black and dingy-gray birth certificate reads "negro" under the category of race.  You see, by 1960, "we" had moved from "colored" to "negro." The year after I was born, the Civil Rights's Act was passed and the following year, the Voting Rights Act was also passed.  The signs came down everywhere.  No more colored or negro this or that. This was thought by some, to be great progress.  But for most of the country, the signs were the only thing that were removed.  Racism continued to flourish and segregation-practices remained in tact.   In the early 1970's our label changed again to African-American.  But I didn't grow up "African-American." None of my parent's friends referred to themselves that way.   As with everyone else who looked like me (that I knew) in the 1970's, I grew up Black.

After moving to Cambridge, Massachusetts, my mother and I moved from one 1-bedroom apartment to another (she always gave me the bedroom and she would hang a "privacy" curtain across the living room threshold to denote her bedroom.)
The places were small, but the neighborhoods were always NICE.  The maple tree-lined streets were trash free and the roads were evenly paved. You waved at your neighbors on their porches as you walked by.

My mother wouldn't hear of public school for me (and certainly not a parochial school after those nuns!).  After she and my father scraped up enough money for me to go to private school, there were several school interviews - with my mother conducting the interviews.
"How many students per classroom?  "What do you do to encourage creativity and expression? Just how many Black classmates will she have?"

My mom's experience in that colored ward in Chicago had scarred her, so the search for the right pediatrician was especially crucial.  I liked Dr. Nauen (pronounced now-enn) as soon as we climbed the broad steps of her home-office and saw her kind, brown eyes and grey-streaked hair piled high into a bun.
But once we were in her office, I started to get nervous.  My heart pounded through my thin t-shirt as I sat on the exam table watching Dr. Nauen put on her stethoscope.
Dr. Nauen breathed on the end of it and kept eye contact with me.  Instantly a steam cloud appeared on the round, metal disc. My mother, who stood right next to her, nodded to me that it was okay.

"Perhaps 'vee-el' examine Pooh Bear first?" She said in her thick, German accent.
I followed her eyes of to the well-worn Pooh Bear with the faded red shirt on the edge of her desk.  She placed the stethoscope on Pooh's "chest" and glanced up at my mother.
"Okay, first 'vee-el' check Pooh Bear's heart beat.  -- Gooot, Gooot."
She shifted the stethoscope to my chest.  Her hands were soft and warm and smelled of peppermint oil. The stethoscope was cold by comparison.
"Now 'vee-el" check Laura's heartbeat.  Goooot.  Goooot...!"

"Okay, Tiger, Tom Dooley is really basically just two chords, first a 'G' and now back to a 'D'.
There!  That's right! You've got it!"

It wasn't until I was an adult that I realized that the "open-minded" people of Massachusetts weren't the reason for the rather idyllic "race-neutral" experience with which I grew up.  I met a women named Lynette in 2014 here in Los Angeles.  It turns out that she is just a few year's younger than me and grew up a couple of towns over from me in Boston.  As we were talking, I realized that in 1974, while I was skipping down our tree-lined street to the Cambridge Montessori School,  she was boarding a school bus in Roxbury that would later deposit her at a White, public school in South Boston.  Once there, as she and her classmates tried to exit the bus and enter the school, they were spat upon and pelted with stones and clumps of dirt.
When you juxtapose our childhood memories, it sounds like she and I we grew up in two different decades, maybe even two different countries.

The fact that I was so astoundingly unprepared for my first taste of overt racism (I was refused service at a nail salon on in Ft. Lauderdale, Florida in 1985) is not a tribute to the virtues of growing up in the 1970's instead of the 1950's.  Lynette's experience is proof of that.  But rather, it is a tribute to how incredibly hard my mother (and father) must have worked to keep me from feeling the effects of the racism that had nearly destroyed her.  Behind the scenes, my parents had created this wonderful world in which my mother and I would both live, but only I would believe was real. 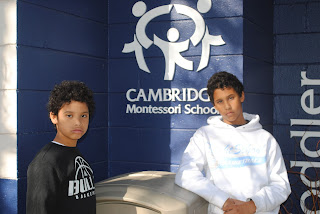 My mom and I took Miles and Justin to Cambridge a few years ago so they could see where I grew up.  It occurred to me on that trip, that they, like me at their ages, seem to enjoy an absolute freedom from daily fears about how they'll be perceived, with regard to race.
They know what the "N-word" means to me, but it doesn't mean the same thing to them.  For them, it's just like "brother" or "sister" was in the 70's.  A signal of a sort,  like a secret handshake.

I have always been vigilant about educating them as to what it means to be young, Black men in a post-millennial America. But I can only say so much to prepare them.  I can only run so many "drills" on what to do if they're pulled over by the police or find themselves in a precarious position at party (statistics show that more often than not, in racially mixed situations - young Black men are more likely to be blamed when something goes south at a party or social gathering).

They're bored with my lectures.  They, like me at their ages, don't see the world as an inherently dangerous place.  I can only hope that their father and I have given them to the tools they'll need when America's overtly racial underbelly is finally exposed to them for what it is.

I had thought (hoped) that when the time came, my boys would leave home and enter into a much more evolved America than the one in which I grew up.   As it is now, when Miles graduates in May, he will be entering in to a world ruled once again (and almost exclusively) by older, privileged, White men.

But if my own experience is any comparison, Miles and Justin may actually be ok.  I mean, I grew up with Johnson, Nixon, Ford and Reagan.  And even though I was shocked when I realized that that salon owner in Ft. Lauderdale was denying me service because I was Black, my response was outrage, not fear or doubt.
I knew that I was (and am) many things, Black is just one of them.  I was angry that she couldn't see that too.  I called the local newspaper and reported her and then took my business to a different salon. Growing up,  I wasn't told outright that other people might see me differently, but somehow my parents must have prepared me for that fact.   My hope is that when my boys encounter people that only see the color of their skin and the texture their hair, that their hurt feelings will eventually be supplanted with feelings of compassion and understanding.  Until then, I hope that they believe that it's a wonderful world for as long as I did.  Thank you, Mommy.

Posted by Laura Cathcart Robbins at 7:19 AM