You're going to make it after all.... 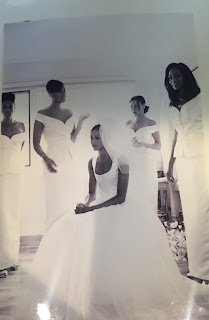 "I have to look for a job."
I waited for a beat before I spoke.
"Really?"
I tried to keep my tone even.  But I was really thrown.  She was the third one of my friends in the span of a year, who, post-divorce was finding that she was unable to pay for things like her mortgage, her car insurance, her light bill and at times, even groceries.
What is going on?!?
"What kind of job?" I asked finally.
I had a feeling I didn't really want to hear her answer.  Anika, was like me - a stay at home mom.  Neither of us had worked in almost two decades.  We're both in our fifties. Her answer could very well be my answer one day soon.  I braced myself.
"Maybe an executive assistant?"
I felt my shoulders tense up. I tried to picture myself as some woman's executive assistant, getting coffee and setting up meetings.
Do executive assistants have to take minutes?  Run personal errands?
"You'd be great at that!" I said encouragingly.  "Do you have resumé?"
"No," her voice was brimming with defeat.  "I don't even know where to start."

And neither did I.  I was a little further along than her, or most of my friends who are currently struggling with their new-found status.
My bestie (divorced one-year ago) who lives in Manhattan,  has always worked and contributed to the household bills, but trusted her husband to take care of their finances (after all, he is a Wall Street guy).  But post-divorce, she's finding New York City to be too expensive and her ex-husband to be a real jerk (with money and other things) - even when it comes to taking care of their son.
I have another friend (divorced four-year's ago) who moved three-hours out of LA , to a place she and her daughters could actually afford, because her multi-millionaire, celebrity husband believed that he didn't "owe" her anything for the 20-years they were together.
I was on the phone with someone last night (she's mid-divorce) whose soon-to-be-ex-husband is a nice guy, but he stated that he simply can't support her and the kids anymore.
"I don't know what to do," she said.
"I know," I said.  I struggled to find better words.
"Albert Camus!" I quipped.
"What? Who's that?' She sounded annoyed.
"The french philosopher," I said brightly.  "The one who said, 'happiness too, is inevitable'."
"Yeah, okay," she said.  Her voice was flat. "But it's taking a really long time.  I need something now."
She was right.  And the truth was I didn't know what she needed.  Clearly money would help, but that wasn't all of it. For me, in order to keep going sometimes I just had to keep moving forward. I had to believe that it would be better one day.
"I hear you," I sighed. "And to quote our dearly departed George Michael, sometimes you've just got to have faith, right?"

It used to be that most of my friends were married.  Nowadays, when I get a call from a married friend I haven't heard from for a while, half the time it's to tell me that she is getting divorced or separated.  Sometimes, watching one of my friends leave their marriage feels like watching someone stagger out of a burning building.

"What happened?  What do I do now?

When it came to my own divorce I was surprised by how much the actual word divorce stung my throat when I told people.  I was so very tempted to lie when the subject came up (you wouldn't know it by reading these blogs, but I really am a very private person).  But after a year had gone by, it started to feel like maybe I was in denial about the fact that I was divorced.  Why couldn't I just tell people the truth when the asked me how "we" were instead of skirting it.

and then quickly flipping it to them...

"So how are you guys doing?"

Well, it wasn't exactly a lie.  Everyone was good.  Just not the way they were thinking.

Brian moved out and has a girlfriend and the boys go live with them every weekend. And oh, I have this great, new boyfriend, Scottie...

So finally (painfully) I started telling people the truth when they asked (I rehearsed my "casual" response in the mirror,  "Oh yes, you didn't know?  we've been divorced for a while now...").
I was shocked by how tender I still was around the subject.  As long as no one brought it up, I really felt fine.  But the moment I saw that look on some one's face,  all of this pain and shame came flooding in from nowhere and swallowed me whole.  Once I'd said it out loud, I braced myself like for their reaction, which stung much like the word itself.  It rang like a slap across my face.

And the truth was that I was really a cliche.  Like my bestie in NY, for all of the years that Brian and I were married I hadn't handled any finances.  I hadn't paid any bills in 14-years.  It had been over a decade since I'd been responsible for things like property taxes and DWP bills.  All at once, less than a year after we signed our divorce decree,  I had to sit with a patient accountant for three hours and nod my head (whether I understood or not) as we went over my taxes that first year.

"Thank you so much," I said when he finally put the ream of signed paper work down with a thud.
"So, do I get money back?" I grinned up at him.
His seemed to try to catch the look of exasperation before it spread across his face.
"No, dear," he said with a weak smile.  He picked up the stack and flipped back through a few pages.  "Should we go over this part again?"

Post divorce, when a pipe broke on our property (correction - MY property) at 2:00am, I was astounded to realize that I was the one who had to go out alone into the dark of night (with a flashlight) and locate the broken pipe and then find the mud-caked shut-off valve with frozen fingers, while on the phone with a 24-hour plumber.

I was scared at night after the kids went to sleep.  Getting Venus and Serena (our labradoodles) helped, but I just couldn't figure out how to feel safe.  Wearing a panic button around my neck (my fingers lightly hovering above the red ALARM button), I would patrol the house quietly in my socks and nightgown looking for the of the source of the noises I kept hearing. I would often get light-headed from holding my breath for so long as I listened to the stillness around me for floor creaks.

I felt very, very single amongst all of my married friends.  I was surprised to find that I was either very smug or every envious when they talked about their own martial troubles.  The smugness, I think, was just my ego hoping for company in that shameful, "failed marriage" category.
The envy was really my shame, taking on yet another form.

Why had my marriage failed?  Had I failed?  Why didn't I stick it out and try harder like my friend, Kari?  She'd made it work!

Thank God for Scottie.  I met him right away (See my blog post "For Medicinal Use Only").   Loving him and being loved by him made all of this so much easier.  To my newly divorced friends, I try not to talk much about how wonderful he is or how wonderful it was to have him as I went through those first few years.  I don't want to make anyone feel like they can't get through their divorce without a "Scottie."

But I am happy that he had I waited for so long before we moved in together (6 years!).  It gave me the chance to see who I was on my own.  As scary as that was, I think it was really important that I got to discover things such as, what I like to eat for dinner (I found out that I can eat salmon every night and NEVER get tired of it).  I discovered that I really like to get into to bed around 10:00pm and to go to sleep around 11:30pm.    I found out that I love to binge on the Real Housewives of Atlanta while eating a frozen Hershey Bar (with almonds - they're SO good cold!).  And by the way, I still do all these things even since Scottie and I moved in together, but if I had gone right from being Brian's wife to Scottie's live-in girlfriend, I might not have been able to stay on that "post-divorce" path of self-discovery for as long as I did.

I was rattled my Mary Tyler Moore's death earlier this week.  I grew up watching "The Dick Van Dyke Show" reruns and "The Mary Tyler Moore Show" (and "Phyllis" and "Rhoda").  This week, they keep showing her show opening over and over on the news.

"Who could turn the world on with a smile..."

Mary Richards, her character on The Mary Tyler Moore show, was single, over thirty (old for that era) and finding her way into a new career.
I think she was inspirational, both her character and the actress who portrayed her.  Mary Tyler Moore the actor, survived divorce,  losing her grown son in a gun accident, alcoholism (she talks about her recovery in several interviews) and diabetes (which I think is being credited for her decline and eventual death at the age of 80).  A few year's later year, (after everyone had written her off) she came back in the acclaimed film, Ordinary People and went on to win a Golden Globe (and received an Oscar nod).

All this to say, what?  I don't know exactly.  I wouldn't compare myself to Mary (Richards or Tyler Moore) except to say that we all (Mary R. Mary T.M. and me) have overcome terrific odds.  I got divorced and sober at the exact same time and I'm here writing this almost 9-years later from my beautiful little office in my beautiful home with my boys (Scottie, Miles and Justin) all sleeping in their respective beds.  Come to think of it, maybe "the Marys" and all of my friends who are joining me in this strange new "post-divorce" realm, do have something in common after all - we've, each of us, taken a leap in to the unknown.

It reminds me of something my friend Bird says (I'm paraphrasing)
Faith isn't jumping from point A to point B.  Faith, she says, is just jumping from A.

And divorce is definitely just jumping from "A."


Posted by Laura Cathcart Robbins at 9:16 AM