Genie in a Bottle


Genie was a hustler, a liar, an IV drug user, a daily drinker, a chain smoker and a conniver.  She was selfish, extremely self-centered, passive aggressive, manipulative and immature.

I've recently discovered that also, to many people, (specifically, my dad and my brothers) Genie was caring, selfless, generous and considerate.  And in recent years, I've come to regard her as having been highly intelligent, self-educated and resourceful (and that woman really loved a good crossword puzzle!)

Genie was also my grandmother.  And writing this may be my first real attempt to forgive her.

"Will you take her back to London to bury her?" He was standing next to Genie's hospital bed.  She had been in a coma for a little less than a week.  Her tests had revealed that she'd suffered a massive cerebral hemorrhage and she wasn't expected to survive.   Scottie was sitting in a chair in the corner of the room, I was standing near her head holding her small, warm hand.  Her hand was soft, but her cocoa-brown skin looked dry and cracked.  I made a mental note to pull out the Jergens from her bag beside her bed after they left.
"Back to London?!" I heard the snicker in my voice.  I folded my lips together to keep from laughing out right.  Scottie looked at me from his chair. His eyes were alight with mirth.
"Um, maybe," I answered solemnly. "It'll be up to my dad.  I'm not sure what her wishes were."
"She's a wonderful lady," his voice cracked with emotion as he took a step forward and grabbed her other hand.
I looked at him with a slight startle.  He was White, tall with thinning, stringy, brown hair.  His brand new, cream-colored, Nike running shoes stood in stark contrast to the over-sized, oil-stained, workman's coat he wore.  I automatically switched to mouth breathing as he got closer, because it looked as though he may not have had a shower for while.  He had arrived a few minutes earlier with two other older, White men from the house in Palm Dessert, where about seven of them rented rooms. Genie was the only female occupant.  One of them was heavy-set,  the other was thin with a thick black, handlebar mustache.  They had each come to pay their last respects.

"Your grandmother was the best puzzler," said tall one.
"When she got her checks at the end of the month, everybody ate good!" interjected the heavy one.
"Your grandmother told the best stories..."
"Let us know if you need help getting her to London to bury her.  We don't have much, but we can help..."
"When I needed bail money for my son," said the mustachioed one.  "Your grandmother gave me her last $20.00..."
"Or at least she said it was her last $20.00!" Laughed the tall one.  "Did you check your pockets?! She might have given you your own twenty! You never knew with Genie!"

No, you never did know with Genie...

She died on April Fools Day, 2013.  One $2,200 mortuary bill later, she arrived in a UPS box at my door.
"Sign please."
While he stood there with an outstretched pen, realization flooded through me as soon as I saw the label on the box.
Oh Jesus, God.  It's Genie.
The act of signing for a UPS box that contained my dead grandmother's ashes seemed absurdly surreal.

I was surprised by how heavy the ashes were.  I stood there for a moment in the cold and watched as the gate closed behind the black and brown UPS van.  The crickets were singing and the sky overhead was clear and full of stars (or, as full of stars as a Los Angeles sky can be anyway).
"Mom, close the door.  It's freezing," called Miles from the living room.
I was turning to walk back into the brightly lit house when I stopped just short of the open doorway.

How am I going to explain what's in the box?

Without a word, I stole off the porch in my bare feet.  I sped up and yelped a little when the soles of my feet hit the surface of the chilly, pebble-strewn driveway.  Flipping on the outside light, I entered the detached guest room and placed her on the bare, carpeted floor.    I sat down cross-legged next to her and stared at the funeral home label on the box-top, keeping my hands on the sides of the box.  The box was cool and smooth and smelled vaguely of wet clay.  I tried to imagine that there was a person in there, a whole life contained in that box. 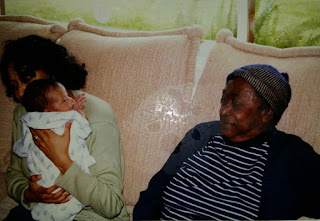 "Liar, manipulator, daily drinker, selfish, self-centered..."
"Huh?" said Scottie. He was laying on top of the covers, propped up against the pillows. I had just burst into the bedroom.
"It's almost 5-years since Genie died.  I'm writing this week's blog about her."
"Oh!" He laughed.  "You were talking about your grandmother!  Yeah, wow, that's crazy! That was 5-years ago?! And all those weird guys in her hospital room from the place where she lived.  What was she, 93?"  He tapped his head with his finger as if to capture the memory.
I nodded and continued.
"Yes, she was 90 something.  But Honey, those words, those are some of the words that I've used over and over to describe Genie all of my life.  I just now realized that a lot of those words at some point in my life could be used or have been used to describe me."
"Well..." he started.
"I was that liar," I cut him off.   "I was that manipulator, the daily drinker, I was selfish and self-centered.  Don't you see?  I always thought, Oh no!  I will NEVER be anything like her!"
"Yeah," he ran his hand through his hair with an unconvinced look. "Okay..."
"I saw her world getting smaller and smaller as she got older and I thought, GOOD RIDDANCE! You should just disappear somewhere where you can't cause anymore trouble!"
"Yeah, you've never really had anyone really like -- well, like Genie in your life."
"But Hon, what if the reason I wasn't able to connect with her the way my family did, wasn't just the fact that I was the only one who saw right through her?  I mean, I'm sure my dad and Kofi saw her for what she was -- and they loved her anyway."
"Well, it was different for them."
I put my index finger up in the air.
"Exactly!  What if, for me,  Genie wasn't just a glass window that only I could see through?   What if, for me, Genie was more like a mirror?"
"Wow, Baby," he said with a tone of admiration. "You got all that from your writing just now?"
"I'm just starting to unravel it, but yeah."
"You know," he said, "with my dad, I truly got to forgive him before he died because I was really able to see him for who he was.  At first I could only see the things about him that I didn't like, such as the fact that he subscribed to a way of life that was based in racism and chauvinism.  And despite warnings from his doctors and my mom's pleas, he stubbornly insisted on killing himself with booze and cheeseburgers.   But he also gave me all this other stuff; my love of fast cars and my appreciation for cooking.  He also taught me about things like loyalty, monogamy and frugality.  Until I could really see the whole person, I couldn't forgive him for his shortcomings.  Maybe you're just seeing a more complete picture of Genie now."

Posted by Laura Cathcart Robbins at 8:13 AM