Is it rude to ask someone what they do? #noneofyourbusiness 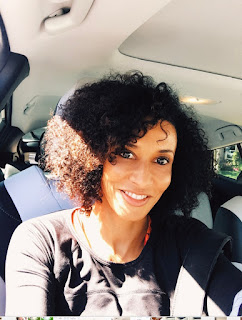 “We just want to say goodbye,” she smiled.

I dropped the pile of wet towels I had just picked up from the edge of the pool and opened my arms to hug her.

“Thank you for coming,” I said, successfully side-stepping an arc of water from some 9-year-old’s belly flop.  “Your family is beautiful.”

I meant it.  Her family is right out of central casting for a modern-day Cosby Show.  Her kids are various shades of brown with red and blond highlights in their assorted types of curls.  The oldest is a boy — the intellectual one, her middle child, a girl, is the athletic one and her youngest, also a girl, is (to quote her mother) “still figuring out who she is.”

“You can ask her your question now,” she smiled, pushing her youngest one toward me slightly. “Go ahead and ask Ms. Robbins.”

I bent my knees slightly so that our eyes were at the same level.  She was the brownest of the three, with smooth, cocoa skin and dazzling white teeth.  Her dark hair was slicked back into a little stubby ponytail on the top of her head.

I bet she wants a lollipop from the kitchen.  They always want lollipops before they leave.

“Ummm,” she swayed back and forth uncertainly, looking up at her mom’s smiling, yet stern face.

I flinched inwardly at the “Mrs” in front of Robbins.

It's a little thing, I hate correcting people, but I’ve never liked “Mrs.”  -- even when I was technically Mrs. Robbins.  It was always too formal, sounded like some wide-faced, big-busted woman with horn-rimmed glasses — not me.

“What is it sweetheart?” I gave her a genuine “it’s okay,” smile and continued to hold her gaze with mine.

Oh.  NOT a lollipop.

I wasn’t expecting this question from an eleven-year-old.

I glanced up at her mother first before answering and stood up tall so that she and I were facing each other.

You should have just asked me.  You’re the one who really wants to know, aren’t you?

I composed myself before looking down at her daughter again and gave a nervous laugh before placing my hand on her shoulder.

I have not yet perfected an answer to this question.  Every time I’m asked, I try out some new answer, but it always sounds incomplete or defensive.  This time, I decided to simply try the truth and see what happened.

“Well, I do lots of things,” I said.  Her mother and siblings were all ears now.  Each one of them nodded and leaned in closer.

“I’m a mom to two teenage boys,” I continued.  “My older son just moved to New York City, my younger one will be a senior in high school this year."

She looked at me as though I had started speaking Urdu.

“I chaired the Sierra Canyon gala fundraiser this year and before that I sat on The Buckley Board for 9-years.”

She turned and glanced up at her mom helplessly.

“Also, “ I continued, “I do volunteer work at a homeless shelter that helps transitionally homeless families find places to live.”

She opened her mouth to speak, raising her hand like I was the teacher.

“And,” I said, interrupting her potential interruption. “I write.  I’m writing a book and I have a blog.”

“But what IS your job?!” she blurted out; I could feel her eleven-year-old exasperation coming to a boil.

“Oh okay,” I paused deliberately and looked at her mother again.  “My job, right?   You mean you want to know what do I do for money.”  I felt the smile slipping off of my face.  I felt cornered.

Are you really going to let your daughter ask me what I do for money?

“Yes!” said her daughter triumphantly. She made a half turn with her arm outstretched, indicating the pool, the house and the rest of the yard.

Oh no she didn't!

I opened and closed my mouth to stifle the word that was coming out next.  I turned back to her mother to look for help, but when I saw that none was coming I looked back at her daughter and inhaled sharply.

“Nothing,” I said finally.

I heard the word hit the ground and explode into a million fragments.  I braced myself for the feeling that always follows that admission -- a kind of anxious, shame-fueled desire to give a better answer.

I mean it’s not that simple (of course), it’s nothing to be ashamed of (I know that) and it’s really nobody’s business (I wish more people knew this).


When I was 25, I was a receptionist for a commercial director in Venice.  At the same time, I also worked as a hostess at a hot Santa Monica restaurant (Bikini) and a hot Hollywood restaurant/club (The Roxbury) a few nights a week.  Back then I hated the question “What do you do?”  I felt like I was so far behind where I “should have been” at my age.   I altered the truth occasionally and said I was a director’s assistant, or I was the Maître’d.  These “more acceptable” versions of how I made money seem to satisfy everyone well enough and allowed me to feel better about myself.

It wasn’t until I became a publicist and then eventually opened my own PR Company that I began to LOVE that question.  I’d wait for it and then answer it very nonchalantly, just to see the look on their faces change to one of casual dismissiveness to one of respect.

“Really?  You own your own company?”

But that all ended a few year’s later when I got pregnant with Miles.  I shuttered my company a few months before he was born.  A year later, while toying with the idea of going back to work (I was going to wait until he was in pre-school), I found out that I was pregnant with Justin.

Well, that’s the end of that.

Since then “At-Home-Mom” has been my standard, lackluster, extremely unsatisfactory answer to the question, “What do you do.”  Whenever I say it, I feel like Lucy Ricardo or June Cleaver, or any other apron-wearing, vacuum-cleaning housewife from a 1950s sitcom.

And after disclosing this tender, fragile, intensely personal piece of information, I’ll usually get back some incredibly condescending version of:

Maybe I’m prickly about this because when people asked me “what do you do?” It wasn't really just about employment, of course.  When people asked me what I did for a living, what they were really saying was;  "Who are you?  What category can I put you in?"

And this was while I was still married and my kids were little.  Once my divorce was final and the kids were in their teens, the questions became even more pressing (and personal):

"I hope the divorce left you and the kids okay.  Your house is all paid for right?"

This translates in my head to:

“I really want to know the exact state of your current finances.  Now that you're divorced, I want to know if you'll have to go back to work."

These questions always catch me off guard. And no matter how they're phrased, they always feel a little “hater-ish” to me.  Like said person (or the world at large) has spent the last twenty years waiting for me to have what  “everyone else" has — a visible means of support.

So, yes -- the question of what I do for work is all tied up with my identity and I haven’t quite figured out how to separate the two.  So, the result of this is that I become inexplicably uncomfortable and defensive when anyone asks me what should be a fairly innocent question — actually, in some circles it’s almost a salutation (“Hi, how are you?  My name is Eric.  What do you do?”).

So clearly, I have some work to do here.  Like I said, I’ve been playing around with different ways to honestly answer the “what do you do” question for the last few years.  Recently someone suggested that I simply say that I’m retired.

I’ll be 53 this summer, so maybe that could actually fly –

But the immediate response  (when I tried it out last month at a school event) was:

“Retired?  Really?  Retired from what?”

Oh well, back to square one.

But this situation at my pool party wasn’t just a question of what I do for work.  For whatever reason, this mom and her daughter were curious about what I do for money. 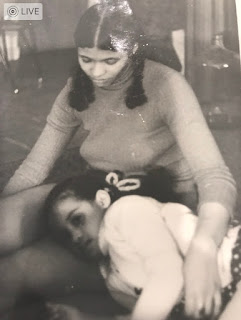 Growing up, I don’t ever remember my mother directly telling me not to discuss money with people.  I vaguely remember her cautioning me with her eyes when I would walk into one of my “rich” friend’s homes and bubble over with curiosity about how much money they MUST have in order to live in such an extraordinary house.

“She’s got a two-story playhouse in her back yard, Mommy!  They must be rich, right!?”

But even though I don’t remember her telling me it was impolite to ask about money, I do remember her modeling it for me.  For instance, my mother would NEVER have asked anyone what he or she did for a living as a way to assess their character.  Money was only ever discussed within our immediate family (usually to tell me we couldn’t afford something).  I never heard my mother take anyone else’s monetary inventory.  Whatever anyone else had was theirs and theirs alone, we just worried about what was ours.  And another thing I gleaned from my childhood -- discussing money at any level with people outside of immediate family was always in bad taste.

But to be fair, this was thirty, forty years ago.  Perhaps, never discussing money is an old fashioned stance.  I mean with a mouse click, you can look up the price of someone’s car or you can see what he or she paid for their house, right?  Is it too “nineteenth century” to adhere to the viewpoint that money shouldn’t be discussed ever — period?

So I looked it up.  It turns out that Peter Post (of the Emily Post Foundation) is very clear about this subject.

“Talking about wealth is really crass.”

“It is distasteful to talk about money.”

“If asked about money, it is better to deflect the question or answer using percentages or something vague.”

That’s what I thought…

And when fielding the question of:  “Is it rude to ask someone what they do?” Mr. Post had this to say:

“It depends on WHY you want to know.  If you are genuinely curious about the person, then asking may not disturb or offend them.  However, if you are simply being NOSY… or worse… trying to assess their financial capacity, this question is not only rude, but can be a conversation ender.”


So I feel a little vindicated by this (okay, a lot vindicated!).  But it doesn’t make me any better equipped to handle those innocently curious/nosy questions about my lifestyle and how it is (“precisely”) that I support it.  I suppose I’ll just continue to try different versions of the same response in the hopes of finding that delicate balance between staying true to my naturally private nature and not being too defensive or prickly.

And as for my party guest, who perhaps didn’t know that asking what I did for money would be such a touchy subject for me -- I hope that my response wasn’t too off-putting.  As you can see, there’s a lot more to that question than meets the eye (for me) and perhaps others too.  Maybe there’s a lesson here for both of us. 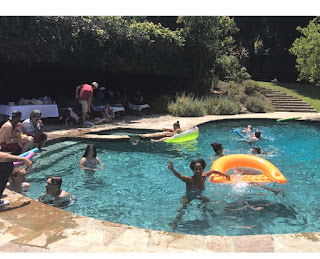 Do you have experience with questions about your job, your identity and money that have made you uncomfortable?  Please leave a comment about how you’ve handled them.  I’m curious (especially since I never discuss money with anyone but Scottie) if anyone else ever feels this way.


Posted by Laura Cathcart Robbins at 7:22 AM