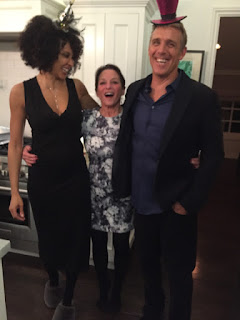 I was on top of the mountain, ski's pointed straight out in front of me so that the tips hovered out like a ledge over the steep face.  My instructor, Jim, put his hand on my shoulder and said in a deep, booming voice (so deep and booming that I feared it might cause an avalanche), "Okay Champ, chest forward, poles back, tips down, bend your knees and stay away from the trees." I chuckled thinly at his glib rhyme, but remained motionless (or frozen, as it were).  Then, suddenly afraid that he might push me, I closed my eyes and forced myself to lean forward. My skis automatically pointed downhill until the bottoms were flush with the slick, powdery white stuff  All at once the wind was whistling past my ears and my breath steamed up my goggles.  I heard my heart beating in my head as the bracing air whipped across my cheeks like ice cold fingers. The mountain top had become the jumping off point and no matter how scared I was, there was no going back.

That's kind of what Halloween is like for me every year.  It's the jumping off point to the holiday season trifecta: Thanksgiving, Christmas (and the like) and New Year's Eve.  On October 31st, I'm always filled with a vague, panicky feeling, followed by a strong desire to flee and hide until January 2nd.  Because from November 1st on --  it's tips down.

I'm not sure of the best way to convey how I really feel about the holidays.  Some of my friends think that I hate them.  That's not exactly true.  There are many aspects of Thanksgiving and Christmas that I truly love and enjoy.  But I really have an issue with the obligatory parts, the spending money I don't have on people I don't really know and the Paperless Posts holiday party-invites, especially the ones with the hidden guest lists, (Really! How am I supposed to know if I want to go, unless I know who else will be there??).  Once upon a time, those holiday "social obligations" were just good excuses to drink unabashedly.  Now, at age 53 and nine-plus years into my sobriety, a holiday cocktail party invitation feels like some sort of moral imperative, rather than something that I look forward to doing.   So here's where I am - I have a huge life with a man that I love.  I have wonderful, authentic relationships with my family and friends.  I wake up excited for the day ahead and snuggle next to Scottie into bed at night, sleeping soundly until morning.  I love my life.  But every time I am confronted with the holiday season I feel a distinct sense of dis-ease.  This feeling is magnified by the fact that very often at dinners and holiday gatherings, Scottie and I are almost always the only ones in the room not drinking (yeah I know, there's sparkling water and Diet Coke.  But even sparking water and cranberry juice seems kind of "meh" when everybody else's faces are flushed with fragrant, red wine).  So even though I don't want to drink, year after year, I just can't seem to shake the thick feeling of intense discomfort that comes when I'm facing the holiday trifecta. During the rest of the year, I don't even think about whether people are drinking or not.  But in November and December, there are just so many parties, dinners and gatherings clumped into a short period of time -- and drinking is always the main event.  Take the first holiday for instance:

Thanksgiving is a food-centered, family holiday (based on how the Native Americans helped the Pilgrims to become acclimated to this new place they called "America" (of course, the Pilgrims later made servants out of the Native Americans and stole their land, but that's another story).  But gnarly beginnings aside, Thanksgiving is probably my favorite meal of the year.  I love mashed potatoes, macaroni and cheese and sweet potato pie.  I love gravy-drenched turkey.  I love the green beans and collard greens. I love, love, love buttered biscuits and Parker House rolls.

Thanksgiving is also a drinking holiday.  Look at any Thanksgiving ad.  You think that turkey is the star of the show?  Uh-uh, the real spotlight is on the cocktails that are served before, during and after the turkey.  On Thanksgiving, wine is poured and consumed in the kitchen all day and night during the cooking and preparation.  Bourbon and whiskey are cradled lovingly in short glasses (neat or maybe on the rocks).  Bottles and cans of beer are opened with that comforting POP sound and swigged in front of the TV.  The more interesting part (for Scottie and I) comes after the other guests are a few drinks in and people start getting confidential and argumentative.  But as an observer, even the spiciest of family drama gets dull when too many drinks are imbibed and people start getting sleepy or belligerent.  That's when I start checking my watch to see if its time Scottie and  I to say our goodbyes and head for the movies.

I'm sure I'm missing a December holiday, but my point is that these holidays all appear to be about family, friends, togetherness, brotherly love (and of course) presents.  And to some extent that is absolutely true.  Hanukkah and Kwanza illustrate and celebrate miracles, journeys and principles.  Christmas is midnight mass, a thoughtfully decorated tree, presents and a beautifully planned dinner.  "Season's Greetings" and "Are you going away for the holidays?" become common salutations in December.  The December holiday season is a collection of festive, warm, colorful, generous days, all strung together like cranberries and popcorn.

Christmas and Hanukah promote family togetherness and goodwill, but for many of us, all of that enforced connectedness can (rather ironically) create feelings of loneliness and inadequacy.  Drinking is the number one, society-prescribed, go-to solution for treating any undesirable feeling (and some desirable ones too)!  But when you're an alcoholic, without warning, this society-approved solution to holiday angst, this invisible liquid barrier and mood enhancer, can quickly become the problem.  And even though there are holi-days when I would be grateful for anything that would help make all of the small talk more bearable, for me, that something isn't booze (anymore).   And yet, during all twelve days of Christmas, I find myself surrounded by well-meaning people who are constantly offering me drinks as a salutation ("Hi! What'll you have?").  And why not?  Every Christmas commercial shows  people with champagne or wine glasses embracing each other and tossing their heads back with laughter.  Budweiser and Jim Beam ads give the viewer permission to do something "nice" for themselves this holiday season (aka drink).  Of course!  You deserve it! (a drink that is).   And here's the subtext to all of that text.  Most people really can't fathom the idea of being around their families for more than a few hours without some liquid courage (i.e., a drink) in their hands.  Yeah, sorry jingle bell-laden, Clydesdale horses, but no — that ice cold BUD is definitely not for me.

Okay, I'm sure even non-alcoholics can admit that this is at the ultimate drinking holiday (and as Frank Sinatra once famously said: "New Year's Eve is for amateurs").  I completely agree.  I've never cared for New Year's Eve, it was the ultimate set-up and let down.  Midnight toast?  Dude!  I started drinking at 4:00pm and always overshot the mark well before midnight.  In fact, midnight was usually a hazy, forehead-smacking-embarrassing memory that hit me the next morning as I peeled my face off of my pillowcase.

But nowadays, everyone "pre-games" on New Year's Eve (for you people my age and up — that's when you get drunk at home BEFORE the party).  So by the time people jump into their Ubers, most of them are already pretty tossed. And by the time we might see them at the dinner party, instead of talking to them,  we're talking to at least 4 gin and tonics and a glass of champagne.

So, no thanks — we'll pass. Scottie and I stay home every New Year's Eve and invite friends over for tamales and sparkling apple cider.  We usually have upwards a couple dozen people who just want to be around other like-minded celebrators and not have to dodge drinks or drunks all night.  It may sound boring to some people (I mean yes, we are always in bed by 12:30.  I know that sounds boring). But I'll be a boring b*tch for an obligation-less NYE party and a hangover-less New Year's Day.

And just so you know, every year, that October 31st "tips down" gets a little easier.  More and more, friends of mine are considerately conscious of making sure to have mock-tails available for us and not making a huge fuss when we politely excuse ourselves after dinner.  That comes with my being better at setting boundaries and making sanity-preserving exit plans ahead of time.  Now we can show up for our wonderful friends who graciously want to include Scottie and I in their respective holiday celebrations, but we can still head home before the all of the other guests get too drunkity-drunk.


Posted by Laura Cathcart Robbins at 6:38 AM