You'll never guess why I'm not the "right kind" of Black 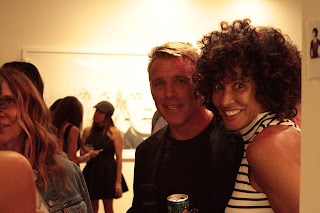 I stop reading and look down at my feet.

Oh boy, she's asking me to join some kind of club.

I pick up the pamphlet again and stare at the caramel-skinned, sleek haired woman on the cover.  She's wearing a silk, fuchsia top under a grey, power suit with a string of pearls.

“We are an organization of mothers dedicated to nurturing future African American leaders by supporting children through...”

I try to remember to smile, but Jessica has caught me off guard.  I normally like to be braced for these "right kind of Black" encounters ahead of time.  You see, my parents were Bob Marley singing, no-white-flour using, dashiki and sandal wearing, natural hair having, hippies.  So I really missed out on the stereotypical Black experience while growing up in Cambridge, Massachusetts.  We were poor, but never lived in the hood and money was always scraped together for private school. Back then, I would have describe both of my parents as "agnostically inclined,"so I never even entered a church until I was in my early twenties (and that was for a wedding).  The Black people I grew up around were more about individualism, art and politics than church, community and Sunday dinner. And for that matter, I have just never been a "joiner" (as it were).   So I knew that I was an enigma to someone like Jessica, who seemed to like me a lot, but was confused by how best to categorize me.

Jessica is shielding her eyes from the sun with her hand.  She’s about a foot shorter than me with shiny, straight hair extensions that hit the middle of her back and smooth, cocoa brown skin.

Yeah, I'm about to disappoint her again…

I had already disappointed Jessica once at the beginning of the school year when I told her I didn't go to church.

Jessica: Really?  (Her voice scales up with thinly veiled indignation) May I ask why?

Me: (thinking) Why don't I go to church?  Isn't that a personal question?  I would never ask you why you go to church!

Me: (Out loud) Actually I never really... (I stop myself mid sentence when I remember that I have the perfect excuse).  I mean to say, that well, my husband is Jewish.

Jessica: Your husband is Jewish!? (she looks at me with a stung expression).  I just assumed he was Black.

Jessica: You know (she pouts) your boys really don’t look mixed. I would never have known.


Me: (thinking) Sorry.  It wasn’t like I was trying to fool you.

But now apparently she’s gotten over the shock of my Jewish husband and mixed kids, because she wants to sponsor my membership into this very sadiddy-looking Black mom’s club.

“Thanks so much, Jessica,” I say indicating my messy ponytail, jeans and grape jelly stained t-shirt.  “But I don't see myself as the 'club' type.  I mean it looks lovely and I appreciate you thinking of me, but I don't think that I can join something where people look so --  proper and put together."

Plus they would see though me in a minute.  It would be like that scene from Invasion of the Body Snatchers when the zombies all point and scream at the imposter.

"Did you hear about Donna?" Karen is whispering to me and Savannah, who is sitting between us.

The three of us are bored with the woman at the podium at our Parent's Association meeting.  I leaned in closer so I can hear the gossip, I have to move Savannah's long, blond hair to one side like a curtain in order to see Karen's face.

"What happened?" I say excitedly.

"They finally asked her step down!"

"SHHHHHHHHHH!" says the woman in front of us.

The three of us get up and move a few rows back and resume our conversation in whispers.  Never a fan of Donna's, I'm happy to hear that she's no longer in charge and I'm eager to find out why.

"Well, it was getting so that you couldn't even say ANYTHING without her getting offended.  She had that nasty chip on her shoulder when it came to anything racial!  So I think they just had enough.  She was just always so angry!"

"That's why they asked her to step down?" My voice sounds like it's coming from far away.  I feel like I suddenly have a hot light shining down one me.  A swirl of confusion has started to churn in my stomach.

"It was always just too much with her," says Karen, grimacing as though it pained her to even discuss it.

"But you're mixed, right?" Savannah suddenly pivots toward me.   "I mean you're not all Black are you?"

My smile drops slightly as I steel my insides against whatever is coming next.

"Yes! You're so pretty," says Karen, pressing her face closer to mine and lowering her glasses.   "I'm just looking at your features.  Is one of your parents White?"

She looks around and lowers her voice when she says, "White" as if it's a dirty word.

Are you saying that I can't "just" be Black if I'm pretty?  That I've got to be mixed?

"I'm just Black," I say loudly, looking them both in the eyes.  "Both of my parents are Black."

Karen's face freezes into a smile.  Underneath her glasses, her eyes are an extraordinary popsicle blue.  Her short red hair is sprayed within an inch of its life, moving all in one piece like a helmut.  I catch a whiff of the minty gum she is chewing.

I can tell I've disappointed her.

She's wondering now, if I have a nasty chip on my shoulder too.  She's confused because she thought I was that right kind of Black.

Savannah is looking around now as though she doesn't want anyone else to hear what's going on.

"It doesn't matter Laura," she stage whispers.  "What are we even talking about!?   I really don't see color, you know?  When I look at you I see a beautiful, obviously intelligent woman, that's all.  I know you understand what I'm saying, right?"

I put my hand on her shoulder and smile warmly.

"Don't worry, Savannah.  I know exactly what you're saying."

I follow his line of sight over to where Scottie is standing.  Scottie is wearing cargo shorts and a light blue t-shirt. He has a styrofoam coffee cup in one hand and his skateboard in the other.  He's smiling and talking to our friend Lee.

"Yeah, that's Scottie.  I thought you'd met him before."

"Yeah I met him before," he says flatly.  "Just didn't know that was your man."

Alfred is tall and brown and close to my age.  He and I always have nice, cordial "Blackcentric" conversations, being that often times we are the only two Black people in the room.

What is that on his face?  Distain? Disappointment?

I snap my lips close before I answer.

And why is he throwing shade all of the sudden?

"But your baby daddy is White too, right?" He steps forward toward me, closing the gap I'd created between us.

Baby Daddy?  Who actually says that?

"Yes, my ex-husband is White.  But I'm not sure what your point is."

Alfred smiles and puts his arms out to the side, as if to hug me.

"Ain't no thing, girl, I'm just messing with you.  It's just there aren't too many fine Black women left on our team, you know."

I'm momentarily distracted by how white his teeth are.

Sometimes I feel like I'm seen as a traitor when I'm walking down the street with Scott.  I've heard the  fuc*ed up comments my people make about other mixed couples.  I'd like to say that it never bothers me, but sometimes it does.  I want to shout out at all of them:  "My White man doesn't make me any less Black!"

"I just hate to lose another one to the other side," continues Alfred, as though he were reading my thoughts.

"Well, you never had me, anyway Al," I say turning around with a smile.  "So there was nothing to lose."


THE RIGHT KIND OF BLACK

A POEM
BY LAURA CATHCART ROBBINS

Black people see me and they wonder “Are you the right kind of Black?”

Do you check all of the boxes that a White person may lack?

They do not ask if I believe.  Instead they simply want to know…

Why I don’t choose to wear a weave and to which church my family goes.

When they see my blue-eyed boyfriend, they talk smack behind my back.

No church, no weave, no brown-skinned man.  She’s NOT the right kind of Black!

White people see me and wonder, “Are you the right kind of Black?”

You’re not too dark and you speak like us!  You’re a keeper, that’s a fact!

These people are relieved, when they see me enter rooms.

Sit down, let’s talk!  Stay here with us! You are our Ace Boon Coon!

You’re so pretty!  You must be mixed.  I’ll bet your mother’s White.

See with you, we can say these things.  Other Blacks might want to fight!

We don’t like those angry Blacks.  We’re glad you seem so calm.

You people are so sensitive when racial talk goes on.

You know we’ve got your back, Laura. With you we can relax.

Because we know for sure now, that you are the right kind of Black!

I don’t want White people to tell me, that with me they’re colorblind.

I’d like for my Black brothers and sisters, to see me with new eyes.

I don’t go to church, I don’t straighten my hair and my man’s that surfer guy.

So, what?  Am I not Black enough?  Did I fail your paper bag test?

Do Sunday services and Jack and Jill prove my “Blackness“ best?

I’d prefer if you didn’t need to know.  To me, it’s all just fronting.

In fact, I don’t like them apples at all — a nod to Good Will Hunting.

It would be nice -- to be myself, without inviting an attack.

When you look my way, can you just see me?  And not what kind of Black?

Posted by Laura Cathcart Robbins at 7:23 AM