My friend Victoria, (who happens to be White) won't engage in politics because she doesn't believe in "these limited barriers that people use to separate themselves."

"Skin, hair, where you are born, who you love, what language you speak, how and what and if you worship --  these things don't really matter.  We are all souls confined in these vessels for a finite period of time.  Why are we fighting over the vessels?"

My first thought was, Really? Wanna trade vessels and see if you still feel the same way?

But the truth is, that the more I think about her words, the more I feel like she might have the right idea.

Scottie and I do an annual road trip every summer with our kids and my mom.  And in certain states, at certain times, when we all walk into a restaurant for a reservation (that I've usually had to have made months in advance) we get -- looks.   Sometimes our big, blended, multi-skin-toned family is greeted with genuine smiles and other times, well -- we aren't.  Because depending where we are and who we meet, all that some people can see (and pre-judge) are the vessels in which we are all contained.  They don't or can't see the strength of our connectedness, the love we have for each other or feel the sheer joy that emanates from each of us because we are all together.

There are thousands of people who are making a daily effort to clear away the thick climate of racial hatred that looms low over our country right now.  But as hard as all those people may be trying to "move the needle" by protesting, lobbying or campaigning, the discouragingly difficult-to-look-at truth is that needle hasn't moved very far (and frankly isn't moving very fast).

According to an editorial in the Sunday New York Times last month, there are three main pathways by which social movements gain power; Cultural, Disruptive and Organizational.

But Scottie thinks that there may be one additional way of effecting real change that the Times' columnist may not have considered: Love

In 2009, Scottie flew me out to Richmond, Virginia to meet his dying father, Harry, who had a major stroke and couldn't move or speak.  Little did Scottie know, that by taking this one simple action, he inadvertently started a "change-reaction" that permeated and affected his whole family.

Harry was an admitted racist.  Scottie's mother Nancy, was a gentle, Southern woman who had lived in Richmond her entire life.  She was kind to everyone, but all of her friends had always been White.  Scottie's daughters, Lily and Nora, grew up in the very homogenous, Park City, Utah, before moving to the even more homogenous, Stowe, Vermont.  But yet, when Scottie fell in love with me, everything changed for the Slaughter family.

There was no questioning or bargaining.  Scottie was with me.  He loved me. He wasn't letting me go anywhere and he wasn't going anywhere without me.

So Harry and Nancy did what any loving parents would do, they made an effort to see me through Scottie's eyes.  One by one, they both abandoned their old, limited ideas of what it meant to be Black.

Nine months after meeting Scottie, I found myself pacing back and forth outside of an ICU hospital room. Inside the room, Nancy and Scottie were preparing Harry to meet Scott's first Black girlfriend (me).   When they motioned me in, the stern-faced, balding, small-framed, White man who lay under a thin, pastel colored hospital blanket literally took the breath out of my body.

My heart beat was noticeable under my black, cashmere crew necked sweater.  I scrambled around the foot of the bed and hurried over to his right side (Scottie had said that it was his good side).  Harry's thin, pale arms lay motionless on either side of him until I got near his face.  Unable to move his head, his eyes followed me, as I set my purse down on his nightstand with a thud.

Without warning,  Harry's right arm sprang into action and scurried across the blanket. I startled at how quickly his hand found my fingers, grabbing and clutching them with impressive strength.  Before I knew what was happening,  I felt his thin, soft lips on the back of my hand.  Scant tears appeared in the corners of his tender, Cornwall blue eyes.

Shortly after his death, Nancy and my mom, Linda became instant, close friends (they were hilarious, goofy, secret-sharing buddies from the gate)! And eight years later, before quietly passing away from ovarian cancer, Nancy, cupped my face with her hands, kissed me tenderly on the cheek and thanked me for loving her son so fiercely.

Lily and Nora have basically only known a family that included a Black stepmother (me) and Black brothers (Miles and Justin) and a Black grandmother, grandfather and uncles (my parents and my brothers).  Their instinct to pre-judge ANYONE has been tempered by the love that they've experienced.  But a real change of perception needs a generation or two to take hold.  You see, Harry and Nancy didn't really release all of their old ideas about Black people when Scottie brought me into their lives, but they did learn to love and accept my family and I.  But it is with Lily, Nora, Miles and Justin that the real change is occurring.  It's not that our kids don't see color, but they just don't see color as a barrier.

Harry Slaughter would have probably never responded favorably to a protest march or some impassioned civil rights speech on television (what in God's name are they complaining about now)??  But his heart turned to butter when his son brought me into the ICU that day to meet him.  He saw beyond my vessel and held my hand, whispering to Scottie that I was beautiful.

I've tried to imagine what that first conversation between Prince Harry and his Grandmother, Queen Elizabeth II, must have sounded like.  I picture him walking into her chambers (or maybe a sitting room?):

"Thank you for taking time out of your day, Grandmother.  I need to speak with you about the girl that I've been seeing."

"Is this the brunette that you've been gadding about with?"

"Yes, that's the one. But we're hardly gadding about.  It's very serious."

"I'm in love with her, Grandmother.  I want to marry her."

"And if it would please you, she would like to be baptized and confirmed in The Church of England."

"I see.  But am I to understand that she is divorced?"

"Yes, Grandmother, she is.  But the union didn't result in any children."

"Very well.  I take it that Ms. Markle is not of the same (ahem) lineage as the other girls that you've dated before, is that correct?"

"That's correct.  She is American."

"I'm well aware of that.  But I was referring to her ethnicity not her nationality."

"Grandmother, she's um, well that is to say, her mother is Black."


The media is in a frenzy comparing Ms. Markle to Grace Kelly.  True, this is a fair comparison as Ms. Kelly was a beautiful, American actress who married into a royal family.  But of course, Ms. Kelly was blond and White.  Ms. Markle's impending trip across the pond is more historically significant because of the simple fact that Ms. Markle is Black (I know, I know -- in the UK they're calling her "mixed-race," as her father is White.)  But let's be real, there really isn't a "mixed-race" category here in the good ol' "Make America Great Again" United States is there?!  Think about it - Halle Berry?  Black.  Tracy Ellis Ross?  Black(ish).  Former (beloved)! President, Barack Obama?  He's Black too.

Ergo, Ms. Markle is a Sistah.

I saw an interview on Monday night where Prince Harry and Ms. Markle both said that they were dismayed by the "racial overtones" of the media coverage of their courtship and engagement.  But I for one am overjoyed by those overtones.  I don't want people to deliberately overlook the fact that she's bi-racial.  I think that now more than ever, race needs to be part of the discussion.  She's not just going to be any princess (with all of the inherent duties, titles and privileges), she's going to be Great Britain's very first princess of color! Prince Harry, British Royalty, fifth in line to the throne has fallen hopelessly in love with a soul contained in the vessel of a beautiful, slightly older-than-him, mixed-race, divorced, American actress.  And if Scottie loving me  could cause such a major "change-reaction" in his small, Virginian-based family, then what are the possibilities with regard to this royal engagement and marriage?

And while its true that Meghan Markle's upcoming journey to Buckingham palace is very appealing at a tabloid level (it has sent Black Twitter into another stratosphere)!  What I really find to be exciting is the possibility that Ms. Markle's presence at Harry's side could finally mark the nexus between mere hope for a blind-hatred-free future and real, lasting change for all types of blended families.   When Meghan and Harry say their "I do's,"it will become harder to hate people indiscriminately who are of a different race, sexual or gender orientation, religion or nationality.  For how can one justify an unfounded distain for an entire group of people, when someone so posh, so royal and so well regarded, absolutely refuses to do so?  If Harry loves Meghan, then perhaps it becomes a little bit more normal for a family to look like theirs, like mine (or like Noel's Norma's, Désireé's, Christina's, Nicole's, Amy's, Barbara's, Leah's, Troy's, Michael and Tony's, Victoria's, Derek and Rick's, Lilah's, Rochelle's, Rehani's, Jennifer's, Ling's -- and so many other of my friend's families).   And maybe one day (long after I'm gone) all we'll really care about are those bright souls that shine within each of our vessels. But for now, I hope that people keep bringing home (to their respective families) whoever it is that they love and plant that seed of change.  It may be America's best shot at real growth; one family at a time, one love at a time, one generation at a time. 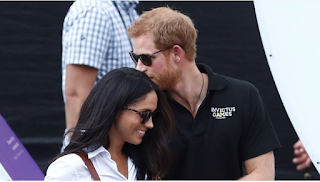 "The fact that I feel in love with Meghan so quickly was confirmation for me that all of the starts were aligned."


Posted by Laura Cathcart Robbins at 6:45 AM