Are you're honestly considering having children? Then maybe don't read this blog #tictictic 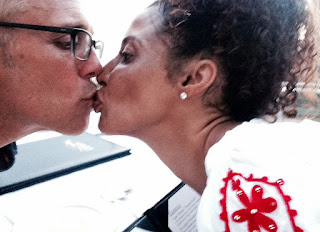 I used to dream about the children Scottie and I would have.  Maybe our girl would have his blond hair and my brown skin.  Perhaps our son would have my long legs and Scott’s strong shoulders.  I was 44-year’s old when Scottie and I fell in love, but the timing seemed off for us to consider having children.   We were both getting sober, both newly divorced and both raising kids of our own.  But on our weekends alone (my sons spent every weekend with their dad and Scottie’s daughters lived in Stowe, Vermont), when we lay face to face, breathing in each other’s breath, gazing into each other’s eyes, we would try different faces, hair and bodies on our imaginary, yet-to-be-conceived children (like I used to do with those old, Colorform dolls).  We tried to picture what our lives would look like with another child — a child of our own.

Everyone who knows me is aware that if there’s a baby around, I’m probably going to have him or her in my arms before too long.  I love babies.  I love their smell and their keen sense of wonder.  I love their innocence and how they see the world.  But I am always surprised by how drawn I am to babies.  You see, I was never one of those girls who played with baby dolls.  As a teenager, I wasn’t sure that I would ever get married, let alone have children.  At age 31, when Miles came along (and then Justin followed 21-months later) I was utterly unprepared.  I did the best I could to duplicate the love, care and protection that my parents had provided for me. But if motherhood were a car, I felt as if I were being dragged behind it.  I could hold on (just barely) but I could never pull myself close enough to get into the driver’s seat.

But love changes everything, doesn’t it?  Because Scottie and I were so enamored, (especially when we were newly in love) I felt as though I were being biologically compelled to consummate our love in a way which would result in the ultimate and indisputable proof of our adoration for each other — a child.  At 47 (during a time where my unusual mood changes had me wondering if I were already in menopause), my OBGYN was astounded to find that each of my ovaries were producing multiple eggs and that my estrogen levels were still normal.

I tucked this bit of information away for a while as Scottie and I continued to etch out our new lives.  His older daughter, Lily and my sons were all pre-teens now.  His younger daughter, Nora had just turned 8.  Scottie and I were more settled into our sobrieties and were finally relaxing into amicable relationships with our respective exes.  All the while though, I was aware that with each passing second, I was losing time on my proverbial biological clock.

“I’d have a baby with you in a minute,” Scottie would say to me before, during or after a tender kiss.  “I’d marry you too, but you know that.”

But I was already starting to question the extremely romantic notion of having a baby.  I was now 48 and my sons were both starting high school. My focus was being pulled in so many directions that the thought of starting over with a baby seemed far away and at times, laughable.

What would happen to our weekend-long “date nights?” What about our "just-the-two-of-us," twice-a-year getaways to beautiful hotels in tropical climates? And what about our yearly summer road trips with all of our kids (and my mom)?

More and more, we each began to recall (with surprisingly sufficient force) the memories of all of those sleepless nights we’d endured, the teething pain tears, the vexation of lugging clumsy car seats and diaper bags everywhere, the hours of homework (that I could barely help with), those inconveniently timed parent-teacher conferences, the excruciatingly long school recitals, the frustration of enforcing those dubiously effective “time-outs” and shrill din of those dreaded visits to the pediatric dentist.  These were all things we agreed, that we were happy to have in the rearview.

A child of our own would change everything -- we knew that.  Did we want that kind of change? It was also (probably) much too late to even think about conceiving and carrying a child naturally. So if wanted to get pregnant I would need to employ medical/scientific help.  I knew all about the physical, mental and emotional demands of those processes from the many friends of mine who had endured them.  But before Scottie and I even considered going down that road, we had to ask ourselves -- was something still missing? We each already had children, but the question was -- how much did we need to have/want to have OUR child?

On the eve of my 50th birthday party, Scottie and I took an inventory of our lives in that same way that we had in the beginning, laying face to face, breathing in each other’s breath, finger’s interlaced.

We are so fortunate.  Our lives are so full with our kids, friends, service and recovery that we can scarcely believe they belong to us.

There in bed that night we confirmed to each other what we both had known in our souls for a long time.  Our lives, just as they were, were more than enough.  We didn’t need to add anything or anyone to them in order to be happy and whole.

This past August, Scottie and I were lying out by the pool of an upscale Santa Barbara hotel.   We both had our headphones on.  I had just flipped over onto my stomach and was reading a magazine.  Scottie had his eyes closed and was a moving his golden brown foot along to the his music.  I was tapping him on his shoulder to give him the lunch menu, when out to the corner of my eye, I saw a very pale woman in her thirties entering the pool area.  She was struggling through the sea of chaise lounges and had a six-month-old baby boy on her hip, a large, heavy-looking bag in her free hand and a larger one on her other shoulder.  Not too far behind her was a man in sunglasses and a baseball cap, pulling a two-year old girl along in a car/stroller, knocking into chairs and hotel guests as he went.  He had a blow-up pool toy around his neck and another large beach bag that was overflowing with pool toys and swim diapers.  I watched fascinated as they finally found two free chairs and the mom started setting up "camp" (with what can only be described as military precision).  The dad was charged with putting sunscreen on both now-screaming children.  Grim faced, he kept “patiently” instructing his daughter to keep still, while the mom “gently” reminded the dad how to best apply the sunscreen to get the most coverage.

("Watch his eyes! Don't forget her stomach, remember she burned there last time").

Finally the dad set his screaming daughter free and then chased her (yelling out her name over and over) to the snack bar.  It was then that an attendant rushed over and informed the mother that they were at the "adult only" pool and that she and her family would need to move over to the kid-friendly pool on the other side of the resort.

I braced myself for her reaction.  Would she cry?  Be angry?  Would she refuse to move?  But no, she just started to calmly pack up their things, while trying to signal the dad over to help.

After they’d finally re-packed and headed over to where they “belonged," Scottie turned to me, smiled broadly and grabbed the lunch menu from me.

I knew exactly what he meant.

Posted by Laura Cathcart Robbins at 6:32 AM