An open letter to my smug mom “friend” (you know who you are): You were actually wrong about... 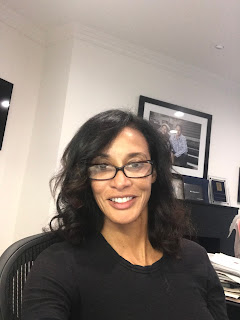 Remember how I used to call you my big sister?  Or Barbie, because of your long blond hair (and you use to call me Francie).

Can you picture us way back then?  Do you remember my kid's first day of pre-school?  Kindergarten?  Fifth grade graduation?  First day of High School? Of course you do.

Because you, my friend, were always there; giving me perfect “mom” advice, telling me cute stories about your hedge fund husband and flaunting your suspiciously toned after-baby-body (“Laura, you should really try this new hot yoga”). You were there telling me (over and over) about your kid’s perfect test scores, while at the same time complaining that he wasn’t “challenged enough” in his AP physics class (meanwhile Justin was struggling through Algebra 1 for the second time, but that’s okay).

Of course, I was there for you too, listening patiently to each re-telling of the story of how you surprised junior with a new Audi A6 when he got into MIT. I was there helping you pick out the color for your 50th birthday-Maybach (although, now I'm thinking that maybe Emerald Green Metallic might have been a mistake). And don't forget, I was also the first of your friends to like and re-post your 2016 Instagram about your kid making Palm Beach Magazine's 50 most eligible bachelors under 25.  Don't you think that only a true friend would go out of their way to promote someone else's highly privileged, overachiever kid (no offense)?

By the way I’m not all bitter about the fact that your kid graduated from high school a year before Justin (even though he’s almost 15 months younger). All right, maybe I am slightly salty about it, but the truth is that still I appreciate your advice and your company (most of the time).  However, I wanted to make sure that I let you about a few things that have been on my mind for a while.

Now don’t get defensive.  You were right most of the time, but there are some stand out places in my life where its possible that you might have given me some bad intel.

For instance, (I know I’m going way back here) but you were wrong when you told me that I would LOVE being pregnant.

You said that I would revel in “carrying LIFE inside of me.”  That I would feel more feminine than I had ever felt.  You made it sound like it would be one big slow-motion romp through a daisy field.

Well sister, I'm sorry to break it to you, but I hated being pregnant.  And it wasn’t just the morning sickness (although that leveled me for the first trimester each time).  But Miles (and then Justin one year later) moving around inside of me really freaked me out.  I felt like I had the life-form from Alien in my stomach trying to punch and poke its way out twenty-four hours a day.  My back hurt all of the time and I couldn’t ever really find a comfortable sleeping position.  I couldn’t wait to get that baby out of me.  So like I said, you were wrong about that.

Which leads me to the fact that you were also wrong when you told me that I would LOVE nursing:

I did not love nursing (okay, I really did enjoy the bonding -- the smell of their tiny heads and the small, sweet sucking noises they made while they played with my hair).  But after they finally finished, it felt like I had two painful, overly full water balloons surgically implanted into my chest.  I was constantly leaking through my blouses (damn those awkward nursing pads!) and running to rest rooms to find an outlet and some privacy so that I could pump.  And when I realized that I was the only one who could do those middle of the night feedings…What?!  Sorry (not sorry), I just did not like nursing.

You were also way off base when you said that I should never sleep with my kids (You know what I mean. Okay – co-sleep, is that better?).

First of all, most of the world co-sleeps with their children.  Kids sleeping in a separate room is some nineteenth century, American-brought-here-from-Europe-custom that has less to do with the health and welfare of the child and more to do with class, prestige, etc., (look it up, its real).  Did you know that in the parts of the world where co-sleeping is still practiced (which is most of the world, including Japan), solitary sleeping is thought to be cruel and is used as a punishment?

So, yeah okay, maybe there was an extra mattress on the floor in my bedroom for a few years after the boys were too big to sleep in bed with us (all right, the mattress was there through middle school).  But sometimes my kids felt safer sleeping near us than in their own rooms at night.  And it’s not like they’re still doing it or they don’t know how to get to sleep by themselves now.

But you did say that co-sleeping would put a strain on my marriage.  I gotta give you that one.  I mean, it certainly didn’t make it any easier (hello legal separation). And by the way, thanks for never saying, “I told you so” when we finally got divorced.

There’s more.  Your prediction that I would “need” to go back to work when my kids started school (because I wouldn't be satisfied with “only” being a mom) was erroneous.  I have never been more satisfied (true, I was bored, frustrated, teary-eyed and out of my mind at times) but I was never dissatisfied.   I love(d) being an at-home-mom. Besides getting sober, staying home to raise my kids was the hardest and most rewarding thing I’ve ever done, and I wouldn’t have done it any other way.

Last thing, you were also wrong when you said that Brian and I shouldn't have been "so happy” when our solid C students finally started bringing home the occasional B.  (“If I got excited every time my kid got a B, would he ever have worked so hard for his A’s")?

But what you couldn’t understand is that our sons aren't cookie cutter kids and we didn’t care if they got A’s.  I know it sounds like a cliché, but all we really ever wanted was for our kids to know that they are loved and to teach them how to survive and hopefully thrive in this world of ours.  Our kids may never be Valedictorians or attend an Ivy League school.

That's okay by us.

I tried to tell you that Brian and I decided to stop trying to modify our kids to fit "the norm" a long time ago.  Honestly, we feel like we've won the lottery by having two high school graduates (one  recent culinary school grad and one college bound) that are social, ambitious, healthy, sweet and fun to be around.   I tried to tell you that, but I don't think you could hear me.  You seemed to think that I was settling or somehow selling them short.

But now after writing all this, I think maybe the bottom line is that you and I have vastly different definitions of success.  So you know what?  Maybe you weren’t wrong after all.

I’m not trying to throw any shade on you or your family (live your life, girl!).  But maybe if I had followed my own instincts, been truer to myself (and not spent all those years trying to be some slightly younger, Black version of you), I'm pretty sure that my family and I would have had a much different experience and quite frankly, probably a better one.

And by the way, you were wrong about one more thing.  Barbie's Black friend isn't Francie, her name is Christie.  GET IT RIGHT, b*tch! 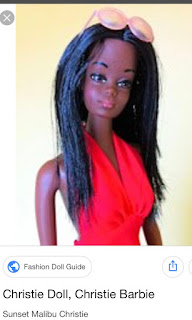 Posted by Laura Cathcart Robbins at 6:37 AM