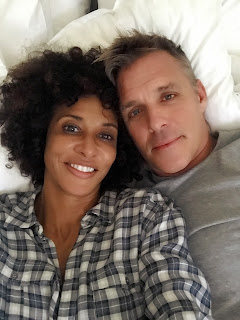 And it’s not even like I’m actually packing anything yet.  Right now I’m in the sorting phase.

Okay, so I hate sorting.

I’m trying to go through all of these folders full of receipts from the last two (or twenty) years.  They’re stacked in four or five inch piles around me in a circle on the floor.  I pick up a faded blue and yellow receipt with a brown-eyed baby on it from The Juvenile Shop.

Kyle Richard’s voice (“Real Housewives of Beverly Hills”) blares from the TV on the wall.  I lower the volume a little with the remote next to me and close my eyes.

I’ve been so busy getting bids from moving companies and getting rid of stuff that I haven’t even really thought about the fact that Justin will be living on a college campus in the fall.

Come August, my baby will be a college freshman.

The next thing I pull out is a photo of Miles from his 10th birthday party. I’d had it made into a thank you card.  I stare the glossy photo with his new 10-speed bike and handsome smile until I find my eyes burning and swelling with inconvenient tears.

Okay, that’s it.  No more sorting.  Maybe I’ll just pack my snow globes instead for a while…

The reality that I’ve been avoiding is, that for the second time in four years I’m saying goodbye to another major chapter of my life.  Four year’s ago, I moved here to Encino from my martial home in Studio City, where I’d lived for 15-years with Brian, Miles and Justin.

They spent their high school years in this house.  This house, which is the first house I ever bought all by myself and decorated to suit my taste (I didn’t even know what my taste was before this house). Scottie and I waited for six years and then finally, four-year's ago, moved in together in this house.

And now I’ve just sold this house because “we’re at the top of a sellers market” and “it’s a smart move for my future”.

But being responsible for my future means I don’t get make decisions based on how I feel anymore.

I hit the home button on my iPhone to see the time.

I pick up a December 2017 People Magazine from my newspaper pile and rip out a page.  I use it to wrap up a tiny snow globe from our trip to Monaco (twice) before scotch taping the ends of the paper together.  I tear out the next page and grab a baseball-sized snow-globe from our family road trip through Nashville through last year.  The page in my hand has a large picture of Kim and Kanye emblazoned on it.  The headline seems to scream at me:

No place like home! Kim Kardashian and Kanye West 'FINALLY move into $20 million mansion' after renovating property for year!

It’s not like I’m one of those “Dash-fans” (is that what they call them?).  I mean, I can count on two hands the number of times I’ve seen “Keeping up with the Kardashians” (Okay that’s a lie.  I’m pretty sure I watched it regularly for at least a year.  Well, maybe it was three or four seasons, but they’re really short seasons, aren’t they?).

I feel my scalp tingling with a familiar mixture of envy and curiosity.  I put the snow-globe down and flatten out the page in front of me on the floor with my hands.

Obviously there will be areas built for personal maintenance. There are plans for a huge gym, basketball court, hair salon and a full spa complete with a facial and massage room.

My face flushes with instant annoyance.

By the way, did I ever mention that I represented Robert Kardashian (the Kardashian dad) when I was a publicist?  I was working for Prudence Baird's PR firm and Robert Kardashian's company, Movie Tunes, was just launching.  It was a big deal then because he had just finished the OJ trial. He was part of that defense team — the Dream Team.  Remember he was the one who carried that mysterious briefcase to the trial everyday? Kourtney, Kim and Khloe were all just cute, little girls then.  He was a really nice guy.  Who knew then that his offspring would grow up and become one of the richest, most powerful dynasties in the world?

Suddenly I feel sticky inside, like I’ve been tarred internally. I feel my eyes glazing over like I’m high on cold medicine.

I should eat something first and then come back and finish wrapping these snow globes. We have those yummy sesame noodles...

I can’t believe that I would actually think twice about Kim Kardashian’s spa room if my blood sugar was normal.

But my body doesn’t seem to want to stand up, so I lean my head back against the wall. Now, Real Housewives’ OG, Lisa Vanderpump is quietly berating Erika Girardi (in her posh British accent) for being so self-obsessed.

Really? Isn’t that kind of the point of all of those “Real Housewives" shows?  Aren’t you all self-obsessed?

With my eyes still closed, I blind-reach for my Evian bottle and take a swig of water, swishing it around my mouth before swallowing.  The water feels cool on the back of my throat.

Maybe this is a case of “analysis paralysis”.  Maybe I can’t do this sorting because I’m incapable of getting rid of anything.

It says here that Kim's organizer, Carla, is taking "great care" with all of the details that Kim wants so that the house is done right before she moves in.

But an organizer would probably blow my whole moving budget.  And this whole move is about me “downsizing” — spending less, saving more, being smarter with my money.

I wonder how many people it took to move Kim and them into that twenty-million dollar mansion?

With the magazine still in my hand, I head over to my computer keyboard.

How much is an organizer?

Immediately a dozen or so pictures come up of closet drawers and stackables.  But down at the bottom, one listing reads:

What do professional organizer’s charge?

I click on that and hold my breath, doing some quick math in my head while it loads.

I mean, if I think about it, I’m actually saving money because I’m bringing all of my beautiful furniture from this house, so maybe…

While I’m musing, my eye falls to the next paragraph of the Kardashian move-in article.  The photograph below it is of a large dirt lot with 30 or 40 construction vehicles scattered about:

The backyard is a mass of dust and dirt with construction vans and even a mobile office planted where a lawn and flowers should be.

The pool is just a slab of concrete right now and the pool house has yet to be painted. Not exactly a lush landscape for little Saint, aged one, and North, aged four.
Hey - what’s this? Kardashian squalor?

Sure enough, it looks as though the Kardashian compound’s back yard is nothing more than a few piles of dirt and clay.  I can’t help but smile as I push myself away from my computer.  I stand up and stretch as I look around my office.

The truth is that I love our new house -- never mind that the backyard is tiny (Hey! At least it's not a dirt lot!)

And Lily (Scottie’s oldest daughter) and Chris (my brother) will both be here in LA going to college in the fall.   And Justin will just be in Orange County and will be home every weekend. Miles already comes home two or three times a week (and he comes every Sunday to make family dinner).

He’s such a good boy…

Plus Nora (Scottie’s almost-14-year-old) will be flying out from Stowe, Vermont every chance she gets (and I’m pretty sure she’ll be coming to LA for college too).

We’re going to have a full house.

It will be just be different, not lonely or boring.  And even with all of that going on, Scottie and I will be able to have more alone time.  I’ll be able to write more.  Maybe he and I can go to Fiji like we’ve been talking about…

I turn around survey the mess on the floor, receipts are haphazardly piled everywhere.  It looks very -- unmanageable and disorderly.  It reminds me of a little of that...

My stomach growls loudly suddenly and I remember that I was going to eat something.

As I head toward the kitchen, I stub my toe on the large snow-globe and then quickly trip over two of the larger piles of receipts, scattering them everywhere. It looks as though a paper bomb has just been detonated in my office.

After releasing a string of whispered curse words into the air above my head.  I limp back over refresh my computer screen.

Fu*k sorting!  How much can an organizer really be?A thousand? Two thousand? Maybe we put off Fiji for a year…

I pick up the magazine again and stare at the photo of the Kardashian's disheveled back yard. In the picture above, Kim looks so secure and confident, like she's all "Yeah, so what my backyard's a mess?  I'm owning my sh*t!"

My laughter startles me (it also may sound suspiciously like crying to a passerby).  I lower my shoulders and force myself to exhale.

"Just wait 24 hours before you take any action on this idea and see how you feel then," (that's Beverly's voice again).

I step away from the computer and turn toward the kitchen again.

"Thank you Beverly," I whisper.

Glancing back at the page on the floor, I feel myself smiling again.

"And thank you as well, Kim.  I might need to just start owning my sh*t too." 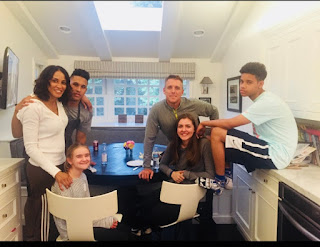 Posted by Laura Cathcart Robbins at 6:56 AM