I'm fairly certain that you or someone you know made a racist comment today. Read on if you're not sure #Microaggressions 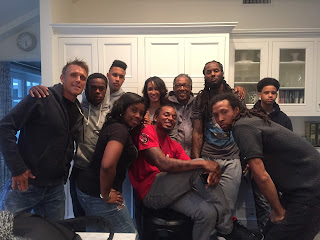 As most of you know, I live with and am in love with a man from the dominant culture (okay, yes -- he’s White).  A couple of weeks ago, Scottie listened with compassion and curiosity as I ranted for a while about an (offensive) personal essay that I’d been asked to read.  As I vented all of my frustration and hurt to him I used a word that he was unfamiliar with – Microaggressions.

“Microaggressions, huh?  You should write about that, Honey.  People need to know what that word means. And more importantly what it means to you.”

But I waited for a couple of weeks so that I didn’t just hit you guys with “therapy writing” (angry or hurt writing about recent and/or still unsolved issues).  I waited until I could speak calmly about it. I waited until I had sifted through all of my uneven emotions and come up with the reason why the essay set me off like it did.  I decided that it was the second paragraph that first made my “racism antennae” go up:

“I’m watching a rerun of last year’s BET awards, and in my head I hear, or I should say I remember hearing, “Those blacks, they sure do sing nice.” I am appalled, again. In a drawer, I have tickets for Bruno Mars; we saw Hamilton and are saving up to buy tickets again…”

I stop reading the online article and push my chair back from my desk.  An old, familiar boil begins churning in my stomach and sends a strong flash of heat up through my neck to my face.

I pull in closer and read on.   My eyes seek out and find other offensive words and phrases throughout the article:

“Silly little ninny,” is used to describe a young, Black girl that the author sees at a bank.

“Lazy jig-a-boos,” is the phrase that springs into her mind when a Black, male student in her writing class leaves the room several times.

Helpless, angry, tears sting my eyes. I close them and turn away from my computer.

Keep it together, Laura.

To be fair, this author (whose initials, ironically, are L.R.) attributes these words and phrases to the relatives that raised her.  She says that while she admits the phrases are objectionable, she still cannot keep herself from THINKING these things when she encounters Black people (Uh – WOW, right?!?).

So I’ve got news for her (and anyone else who thinks this way) — those words, even when used casually to explain the thoughts and behavior of “others” are offensive.  I will not speak for all Black people or people of color (of course) but I will say that they are offensive and hurtful to me.  And like I told Scottie, they have a name.

Microaggression: Is something, which is especially offensive to people of color (brief and commonplace daily verbal, behavioral, or environmental indignities, whether intentional or unintentional that, communicate hostile, derogatory, or negative racial slights and insults toward people of color).

I feel like Microaggressions is kind of a misnomer.  There’s nothing “Micro” about the impact of these aggressions.  They carry all the punch of a regular aggression.  It boils down to this for me.  There are just simply some words and phrases that you cannot say if you're not Black.  Not even when you are giving an “example," not even when you are singing the lyrics to a popular song, not even when “all of your friends are Black.”

But here’s what your use of these Microaggressions DOES force me to assume — that you are either a racist or you are walking around with some serious, unchecked, racial bias.

Scottie and I have been together for ten years this summer.  He has a really decent understanding of where and how he can participate when our family discussions fall around the subject of race, specifically when it’s about what it’s like to be a person of color.  In other words, he knows the rules.  When he hears others from the dominant culture straddling that line, using words that don’t belong to them, whether in an effort to connect or an attempt to be hurtful and destructive, he is appalled (and hurt sometimes I think, for me).  He knows when to “check his privilege.”  He knows that that the oppressed can never be the oppressor and therefor, here in America,  Black people cannot be racist.   He also knows that once you say those forbidden words out loud you can never put that toothpaste back in the tube.  It’s out there.  You have shown your true colors (no pun intended).

The last thing I’ll say is that I’m not an idiot.  I know that many people think this way, speak this way, especially when they’re “amongst their own kind” (remember, “shi*thole countries”)?   So yeah, since our Commander in Chief uses these words, I have abandoned the optimistic notion that we might one day live in a so-called “post racial society.” But that doesn’t change the fact that these words are deeply rooted in the racist soil upon which this country was built.   Microaggressions are words that wound and they infect the bloodstream of our society like a toxin.

And also, these words hurt my feelings when you use them.

The last thing I’ll say (for real) is that there are several other groups of marginalized people that also suffer from Microaggressions.  Brown people, Native Americans, Asian people, people of the LGBTQ communities, Muslim people, Jewish people, etc.  Also in a very real way, other people who fall prey to Microaggressions include; overweight and underweight people, people with learning and/or physical disabilities, people who speak with an accent, people in recovery, people with food allergies or dietary restrictions, people from so-called third world countries, poor people or rich people (although I wouldn't categorize wealthy people as marginalized), but you get my point, the list goes on and on.

Here are some examples of Microaggressions below: 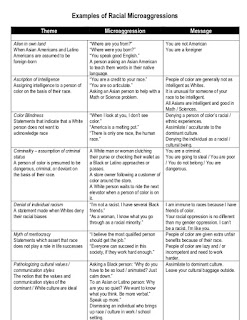 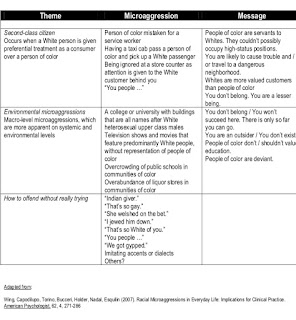 That's really all I have to say about the matter (I think L.R. has taken up enough of my precious energy).  But I’d love to hear about your own experiences with Microaggressions.  Please leave them in your comments for me.

Posted by Laura Cathcart Robbins at 7:24 AM