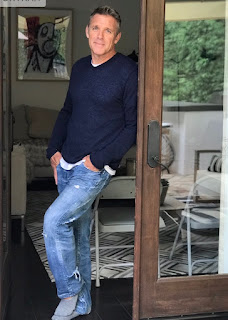 “Does this look okay?”

He is standing in the doorway wearing an oversized, faded red and blue Hawaiian shirt with baggy, oatmeal-colored bathing suit bottoms. There are worn, brown leather sandals on his feet.

Scottie and I met a year earlier in treatment.  It had been easy to ignore his wardrobe-choices at The Meadows in Wickenburg, Arizona.  July of 2008 had been nothing short of oppressively hot (in the triple digits every day) and we were told to bring comfortable clothes for a thirty-day stay (clothes, which we wouldn’t mind getting dirty).   Plus, if his packing experience had been anything like mine (racing around for 45 minutes, hiding empty bottles, blinded by tears), any wardrobe faux pas could be easily forgiven.

But here we are in Los Angeles, nearly a year post-treatment, trying on this new (and highly unlikely) romance.  And he now shows up for our sushi date in  -- well, this.

“Umm,” I start.  I falter when I see the innocent look on his face.

I feel a match lighting in my stomach.

“What?” His blue eyes are wide with uncertainty.

It is barely a whisper.  I can’t look up at him. I hear his huge shirt rustling around his rib cage as he takes a few steps toward me.

I look up at him suddenly.  A surge of heat from that lit match rises from my chest into my throat.

I’m panting slightly now, taking in big gulps of air while I stare at him.  A year’s worth of "opinion-stuffing" is now out on the floor between us.  He eyes me back evenly and then steps over to a mirror by my front door. Immediately, I feel my body start to cool.

“You mean you don’t like this?  It’s not like I was trying to dress up or anything.  We’re just going down the street to get something to...”

I walk over to him and gently place my hands on his broad shoulders.

“I can help,” I say pleadingly, staring at his eyes in the mirror.  “We can go shopping, okay?  You just need a few key pieces.”

“Seriously, Laura?” he holds his arms out to the side as if I should inspect him further, like maybe I missed something.

“This shirt is REALLY not ok?!”

“It’s offensive,” I say kissing him on his tanned cheek.  “And the bathing suit…”

I place my finger over his soft lips and face him.  Our noses are less than an inch apart.

“All of this,” I say making a big circle with my hand as if I’m erasing the outfit from his body.  “All of this has to go, Honey -- I’m sorry.  You’re simply drowning in this baggy North-Face-sale-rack-looking stuff.  You have this athletic build and those amazing shoulders.  I know you’ve been in the mountains of Utah for 20 years but you live in LA now.  We need to get you clothes that fit. Clothes that people wear in CITIES when they go to lunch.  Clothes, preferably from this decade.”

I smile widely at him and move in for a kiss.

“Honey, you’ve got another package from James Perse?”

I’ve kicked the box as I opened the front door.  As it appears to divide in half, I realize that it’s not actually one box but two.

Scottie comes striding toward me from the kitchen with a grin on his face.

“Hi Honey.  That’s my jacket I hope — and maybe that button down I've been waiting for...”

I drink him in for a moment.  He is wearing jeans that are the perfect wash of dark blue.  The fit makes his legs look even longer.  He wears a thin, white button down shirt under a black cashmere sweater with a slight V-neck.

“That jacket you said you wanted the other night?” I say with a pout.  “I was going to buy you that jacket for your birthday.”

“There’s a Rag & Bone blazer that I’ve been eyeing too.”  He scoops up the packages without missing a beat.  “Wanna see?”

As we’re lying in bed that night I grow impatient waiting for him to put his laptop down so that we can snuggle and watch the season finale of Homeland.  It’s all we’ve both been talking about for a week and now he seems preoccupied.

“Whatcha looking at, Hon?” I say reaching for my reading glasses so that I can see his screen.  His eyebrows are knit in concentration.  He gives me an absentminded, sideways kiss on the cheek as if to say goodnight.

“I had these pants in my shopping basket.  The soft, black track-pants I told you about? Now I can’t find them anywhere.”

“Honey?” I say with some bass in my voice.  “Homeland, remember?  Any second now someone’s going to post a spoiler!”

“Got 'em!” He startles me as he raises his arms suddenly in triumph.  He turns to me with a wide grin.  He looks giddy with relief.

He gives me another kiss, only slightly better than the one before.  His eyes are glued back to the screen.

Lord - what have I done?

"Honey," I say, willing him to look over at me.

I sit there digesting the fact that I've actually created a clothes monster when I remember an article that I'd read in the Sunday New York Times. The article had coined a term for "hetero" men who really like clothes.  A term for men like Scott.

"Ladies," it read, "If your guy has great taste in jackets and his shoe closet rivals yours, you might be lucky enough to have stumbled upon a fashion-world 'urban legend'- the 'Buy-Sexual' man..."

At least they're all really great pieces.  And he hasn't even needed input from me in years...

“Okay Hon," I smile.  "Take your time." I kiss him on the forehead and settle back against my pillows.  “And by the way, Hon?  Those pants?  They are really, really good.”

Posted by Laura Cathcart Robbins at 7:03 AM