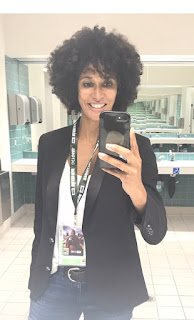 As I write this blog, my memoir book-proposal is out there in the world getting busy.

Busy being rejected that is, by several different (well-researched) literary agents.  The few that take the time to respond to me, all basically say the same thing:

So instead of being defeated, I’ve decided to look at these words as a call to action.  I’ve been advised to build what is called an “author’s platform” (an ability to sell books because of who you are or who you can reach - I.e. “likes, comments and followers”).  In order to make this happen I’m starting to do more of what I see other authors doing to boost their platforms.  The long (and exhausting) list I’ve put together includes but is not limited to:

Blogging (✔️)
Podcasts (I start my podcast class next week)
Storytelling (I just WON my first Story Slam at the LA Moth this Tuesday – after taking a storytelling class. HOORAY!).
Taking writing class after writing class (✔️ I just signed up for another one last night)
Cranking out an insane amount of article-submissions to various outlets (trying)
Reading the insane number of articles published by these outlets, getting familiar with editors and other authors (again, trying)
Being an active member of a writer’s group (✔️)
And last but certainly not least, NETWORKING, which includes: Going to RETREATS.

So, to this end, I registered for a retreat headlined by best-selling powerhouse authors (and besties), Elizabeth Gilbert and Cheryl Strayed (Eat Pray Love and Wild, respectively). When I signed up, four other women from my online writers’ group (there are seven of us total) had also signed up.  I had never before met any one of these women in person (we've been meeting for years via video conferencing).

I arrive last Thursday after flying into San Jose’s airport, picking up my hybrid from Hertz and driving up the windy, narrow roads to 1440 Multiversity, which rests at the top of the Santa Cruz Mountains.  I am so mesmerized by the scenery that I actually forget to be nervous about being in this unfamiliar situation (my first writer’s retreat, my first time meeting the other ladies face-to-face and first solo trip for any reason in over a decade). However, my stomach begins to churn the moment  I take my place at the back of the 200 + person check in line.

Craning my neck to look as far down the line as possible, all I see are natural blond ponytails and top-buns, whose wearers look like they were born holding a yoga mat in one hand and a mason jar in the other.

I do see a few silver-haired White women. I see three or four brown women (Middle Eastern, Indian or Pakistani?) and five Asian women (one I meet tells me that she is Korean American).  I find out later that there are 11 men in attendance also.

But there are no Black attendees.

There are 600 people here in total.

While I continue to stand in line, it begins to feel as though some of the women are now craning their necks to look back at me. Ignoring the stares, I try to picture how any of these yoga mat-carriers would feel if they’d arrived at a retreat where absolutely every one of the 600 attendees (and all of the facility staff-members) were Black.

They’d probably slip away nervously and call someone, right? Or maybe they'd turn around and head back to the airport without saying a word to anyone.

I feel irrational tears pressing against the backs of my eyes.

Really?! How is it that an event this big, in twenty fricken eighteen can be so incredibly homogenous? How is that I can be the only one - STILL - AGAIN at age 54?!

I think about getting back in my car and driving down that crazy mountain road back to the airport.  I am pretty sure that no one would blame me if I did.

Enter the women from my writers group.

Gripping my car keys in my left hand so hard that my palm hurts, I use my right to send a group text, telling them that I’ve arrived and say that I’ll be “easy to spot."  Moments later, Stephanie appears (she lives in Portland) and then Dana (who lives in Charlottesville).  They are both so happy to see me that it relieves a bit of my self-consciousness. Soon we are in the dining hall.  We’ve now been joined by Amy (she lives in Oakland) and Riva who lives in Toronto.

This whole time, I am constantly aware that I am quite obviously the fly in the proverbial buttermilk.  But even though I'm resisting it, I find myself beginning to feel at ease in the company of these four White women.  I am reminded of my freshman year of high school, basking in the safety of my posse of girls, watching others take notice of our "sister bond" and walk in the other direction with their cafeteria trays to sit at other tables.  I credit this "instant" bond with Stephanie, Amy, Dana, Riva (and Wendy and Kim who couldn't attend) to the fact that we've chosen to share with each other, extremely intimate subjects and events over the years through our writing; pregnancies, babies, prostitution, depression, falling in love, suicide, alcoholism, (me) infertility, divorce (me again), assaults, abuse, prejudice, bullying, breakdowns, etc...

These four women recognize immediately that I am the only Black participant here and know better than to pretend that it isn’t an issue.  They discuss it openly and inquire without agenda how things feel for me.  I am so at home with them in those first few moments that I almost get teary again.

I guess I'll stay for the night at least.

Day two of the retreat I think that I spot a Black person out of the corner of my eye on the other side of the auditorium — then that person is gone — disappeared.

Hold up! Did I just imagine her?

Later in the afternoon when I actually see her against a far wall, my suspicion is confirmed.

We nod, acknowledging each other across the room (as is our code). I am relieved, but also in a very strange way, I am almost disappointed.  You see, in just two days time, I have started to relax into my solo minority role (although I am still a bit unsure as how to receive the many women who continue to approach me with strong handshakes and teary eyes -- thanking me for being here).

These encounters aside, I’ve discovered that even in the Whitest of White environments, with the help of these four women, I’ve been able (this time) to set aside my painful memories of being the only Black person and have a new experience with it.

The truth is that I've having the time of my life at the Brave Magic retreat. Once again, I've learned something new about the most important person in my life — me.

Posted by Laura Cathcart Robbins at 7:33 AM