You’ll never guess which celebrity I heard crying about having to take a day job, but I can tell you this - it wasn't Geoffrey Owens #realman 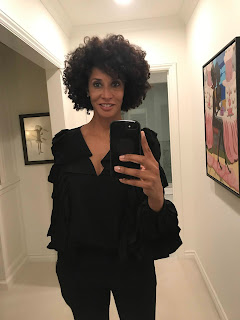 I was in a recovery meeting a few years ago and this pretty famous, two-time award –winning actress was sharing that she was struggling – not with booze, but with her recent fall out of the limelight (and the resulting “broke-ness” that followed).  She was lamenting about having to rely on the kindness of her more prosperous actor friends while waiting for her agents to come up with some role worthy of her status.  She said that she was sickened by the idea that she might have to take some “menial” job until the next great part came along.  She said that she didn’t know if she was cut out to live like “other people” and then she burst into sobs.

I watched her intently while she cried (honestly, I’m sure my mouth was wide open as I was a big fan of hers and had never before seen her in person) wondering, if she was crazy or correct.  Okay, it’s easy to see the truth now in hindsight, but at the time she was incredibly convincing about her plight (hey – she didn’t win those two awards for nothing!).  So convincing that even though I left the meeting unbelievably annoyed that she expressed so much dread about living the way “other people” did (I.e. me), I also thought, “Hmmm - maybe she is making the right choice by sticking to her guns and not “settling” for a day job.  Like maybe there’s some honor in her waiting for that next award-winning part.”

It was around this same time that a kid named Jordyn Owens joined my son’s, Miles and Justin’s basketball team. Besides Miles and Justin, Jordyn was the only other “mixed” kid on the court (and quite the phenomenal point guard). That, coupled with the fact that our boys really got along, made it natural for my ex husband and I to gravitate toward his parents, Geoffrey and Josette.  Many are the time that I would climb past all the other parents on the bleachers (smiling polite “hellos” and “excuse mes”) to sit up next to the Owenses.  They would do the same if we were there first.  It was a nice, unspoken camaraderie, safe and easy.

Josette is a pistol – fun loving and personable (with an enviable head of shining, dark brown hair). Geoffrey is mild-mannered, well spoken and kind -- rarely speaking though, while the ball was in play.  He kept his eyes trained on his son the entire time and his rare outbursts were usually because of a bad call from the ref or a whoop for another coast-to-coast play by Jordyn.  When Geoffrey wasn’t working (acting) both he and Josette were at every practice and game. I was always struck by Geoffrey’s fierce devotion to his family and by their devotion to each other. I was sad when they moved back east in 2010.

I’ll stop here and say that for those of you who may have been consumed this week with the fervor surrounding the Supreme Court Justice confirmation hearings, the anonymous New York Times op-ed or the Nike/Kaepernick ad campaign, there is another great little story going around that also deserves your attention.  It’s about the job shaming of a former Cosby Show actor.  Have you seen it?

Mr. Owens was photographed at his former job (Trader Joes) where he bagged groceries for 15 months.  Fox News posted it in an apparent effort to shame him, but this wonderful thing happened instead.  Quite without meaning to, by posting that photo of Geoffrey at work, Fox News launched an honest to goodness, “trending” hashtag hero --  #realman #geoffreyowens #actorswithdayjobs #hero.

When I saw Geoffrey‘s interview on Good Morning America this Tuesday, I was struck again, not just by his devotion to his family, but also by his humility.  It is rare, I think to see anyone in his chosen profession exhibiting that kind of “Zen energy” when his or her identity has been called into question.  I was so proud when I watched how he fielded the questions, handled the attention.  I think I felt like I had something to do with it because I have a personal connection with him and his family ("Hey, hey!  I know that guy!  Our kids used to play basketball together!").

It also struck me after watching his segment, how very wrong that famous actress had actually been (obvi).  There was no honor in her living off of her more fortunate friends.  There was no dignity in refusing honest work while she waited for the right part. And there was no humility in voicing her cowardice about the possibility of having to "live like other people."

I just really love that Geoffrey didn’t even know he was trending on Twitter until Robin Roberts told him.  I adore the fact that he was genuinely surprised to find out that Tyler Perry had been watching him trend and offered him a role in his new OWN series.  An offer, which Geoffrey has apparently, now accepted (he'll appear in 10 episodes!).

That actress by the way, was also in the news again recently (though not for the same reasons as our Mr. Owens, unfortunately).  She is apparently facing some petty burglary charges -- a burglary which took place just a few miles away from where Geoffrey did his first, exclusive interview this past Tuesday.  Her item was minor news for a day or two (while Geoffrey is still a trending topic on Twitter as I write this).  Side note - apparently rapper, Nicki Minaj, was also so inspired by his hashtag story that she announced her intentions (yesterday) to "donate" $25K to him.

Honor verses ego, dignity verses degradation, humility verses humiliation.  So thanks Fox News, for not only highlighting the fact that there are still men and women who are making all the right choices -- but that Geoffrey Owens is one of them. 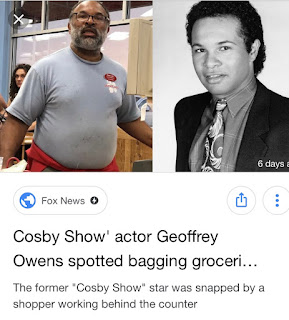 Posted by Laura Cathcart Robbins at 7:26 AM